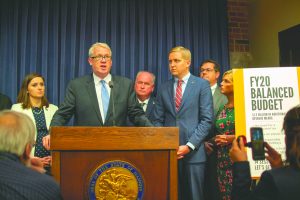 House Republican Leader Jim Durkin, of Western Springs, speaks during a news conference Thursday at the Capitol in Springfield. He, Deputy Minority Leader Tom Demmer (right) and others presented a one-page document detailing $2.6 billion more in revenue than House working groups had planned for. They say that means a balanced budget can be passed without adding revenue sources. (Photo by Jerry Nowicki/Capitol News Illinois)

SPRINGFIELD — Illinois House Republicans called a news conference Thursday, May 16 to unveil a “fiscal year 2020 balanced budget proposal” in the form of a one-page document detailing $2.6 billion more in revenue than House working groups had previously planned for.

“The important part here is we’re not presenting a plan and saying ‘take it or leave it,’” Deputy Minority Leader Tom Demmer (R-Dixon) said. “We’re saying there are new dollars that are on the table, that individual members have not yet been given the chance to weigh out. We believe their priorities should be heard.”

Demmer said House working groups have been negotiating a balanced budget without new revenue that would be achieved by cuts of 6% to 10% from fiscal year 2019 expenditures across agencies.

But many of those cuts will not be needed, he said, because of increased fiscal year 2020 revenue estimates by the Commission on Government Forecasting and Accountability and the Governor’s Office of Management and Budget, as well as a handful of other new revenue streams Republicans stand ready to support.

“These numbers do not come out of a Republican think tank. This comes from the governor’s own agency,” House Republican Leader Jim Durkin, of Western Springs, said at the news conference.

Demmer said the increased estimates include $845 million for fiscal year 2020 in added income tax ($800 million) and sales tax ($45 million) revenue without any increased taxes. These estimates were increased by COGFA and GOMB based on an unexpected $1.5 billion April revenue windfall, and they allowed Gov. J.B. Pritzker to scrap an unpopular proposal to decrease the state’s mandated payment to its pension fund for FY2020.

Another $1.4 billion depends on revenue proposals backed by Pritzker. That includes slightly more than $1 billion in general revenue funding that would be freed up by a tax on Medicaid managed care organizations.

Demmer said MCO tax money will go to a special “Health Care Provider Relief Fund,” where it will be matched by federal funds. This will allow General Revenue Funds previously used for Medicaid expenditures to remain in the GRF to be used for other budgeting purposes while the same level of Medicaid spending is maintained.

“Without changing the dollars that are being paid for Medicaid, it reduces your general revenue fund liability,” Demmer said in a follow-up interview.

The Republicans also account for $212 million in added revenue from legalized sports gambling, using the estimates of another Pritzker proposal.

“We’re saying we feel confident we can put a proportionate number of House Republican on proposals to achieve those revenues,” Demmer said.

Republican estimates also include a $375 million transfer to the general revenue fund from a reserve fund used to pay tax refunds, which has a surplus of about $440 million, Demmer said. They also include another $175 million from an amnesty proposal designed to incentivize the payment of delinquent taxes.

Durkin said the Republicans’ proposal shows that no new taxes are needed to balance the budget in fiscal year 2020, and Republicans should be playing a larger role in the budgeting process in general, as all four legislative leaders have not met with the governor on the budget since mid-April.

Democrats, on the other hand, say that even though unexpected revenues are appreciated, the state’s underlying budget deficit can’t adequately be addressed without new revenue streams.

“Illinois’ dire finances mean that the state was on track to end the 2019 fiscal year with a $1.6 billion gap, to say nothing of our multi-billion dollar backlog of unpaid bills and $134 billion unfunded pension liabilities,” she said. “The responsible choice, and the governor’s path, is to use the additional dollars to close our 2019 budget gap and to make our full 2020 pension payment. The governor’s door is open for working with Republicans who want to join him in approaching our finances responsibly.