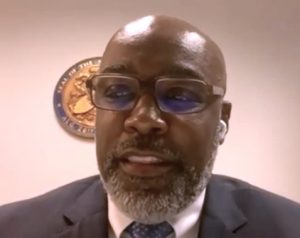 Illinois Attorney General Kwame Raoul, pictured in a virtual news conference earlier this year, is one of 48 attorneys general and top lawyers from U.S. territories joining in a lawsuit against the social network Facebook. (Credit: Zoom.us)

SPRINGFIELD — Illinois Attorney General Kwame Raoul filed a lawsuit against Facebook Inc. on Wednesday, Dec. 9 as part of a coalition of 48 state attorneys general and top lawyers from U.S. territories.

In the 123-page complaint filed in the U.S. District Court for the District of Columbia, the 48 states listed as plaintiffs allege that Facebook used illegal tactics to undercut competition “in the personal social networking market in the United States.”

The states are asking the federal court to ban Facebook from continuing certain financial practices, restrain their ability to purchase other companies valued at $10 million or more without notifying the plaintiff states and potentially restructure Facebook by removing assets the court determines were illegally obtained.

The Federal Trade Commission has also filed its own lawsuit against Facebook to “undo and prevent its anticompetitive conduct and unfair methods of competition in or affecting commerce.”

“For nearly a decade, Facebook has profited tremendously by monetizing the personal information and online habits of users. Key to its strategy has been impeding and eliminating any perceived competition, ensuring that users have no alternative to Facebook’s platform,” Raoul said in a release distributed on the afternoon of Dec. 9.

“Facebook’s ruthless anticompetitive practices have stifled innovation, harmed small businesses, and most importantly, reduced privacy protections and alternatives so that it could continue to earn billions of dollars at users’ expense. I am joining my colleagues around the country to ask the court to end Facebook’s monopoly and give consumers the choice and protections they deserve.”

Key to both lawsuits filed against Facebook is its 2012 acquisition of the photo-sharing platform Instagram and its 2014 acquisition of the mobile messaging application WhatsApp. The FTC and states that are suing Facebook allege that the company tracked the metrics of start-ups in industries Facebook was interested in and offered to buy out the companies with offers far above their actual value, inflating the worth of those companies during acquisition and eliminating future competition that could hinder Facebook’s growth.

Mentioned in the FTC lawsuit is Facebook’s failed attempts to purchase Snapchat and Twitter, two other now-large competitors, early in their development cycle in 2013 and 2008 respectively.

By purchasing competitors, collecting vast amounts of private information on their customers and freezing out third parties from accessing that data after they became reliant on Facebook, the company was able to establish an advertising monopoly in the social media-sphere, according to the two lawsuits.

While separate from the states’ lawsuit against Facebook, the FTC’s filing also calls for assets, such as Instagram and WhatsApp, to be removed from Facebook’s holdings under existing anti-trust laws.

“Personal social networking is central to the lives of millions of Americans,” FTC Bureau of Competition Director Ian Conner said in a release on Dec. 9.

“Facebook’s actions to entrench and maintain its monopoly deny consumers the benefits of competition. Our aim is to roll back Facebook’s anticompetitive conduct and restore competition so that innovation and free competition can thrive.”