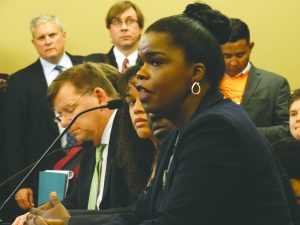 Cook County State’s Attorney Kim Foxx testifies Tuesday before a House Committee, saying that requiring criminal defendants to post cash bail before they can be released from jail pending trial does not protect the public from violent offenders. (Photo by Peter Hancock/Capitol News Illinois)

Supporters of that idea say it would bring greater fairness to the system, especially for low-income people charged with relatively minor offenses.

But prosecutors and law enforcement officials warn that such a move could have far-reaching consequences, including putting victims of domestic violence at risk and taking away the ability of local courts to fund services for crime victims.

Those were some of the issues raised Tuesday in a House committee that is reviewing the impacts of the 2017 law and debating whether to continue down the path of bail reform, or whether to roll back some of the new limits on imposing cash bail.

Cook County State’s Attorney Kim Foxx, who supports eliminating cash bail, said that before the 2017 reforms, the system of requiring people to post cash bonds was not keeping violent felons off the street.

“One of the costs of doing business in some of these violent enterprises is going to jail,” she said.
“And thus having money available to bail someone out of jail was accessible to them. So when we were looking at our population, we weren’t finding that the majority of people in our jail were there for violent offenses. We found the majority of those who were in our jails were there for nonviolent offenses.”

Under the 2017 Bail Reform Act, people charged with nonviolent misdemeanors or low-level felonies are presumed to be eligible for release without posting bail. Instead, judges can order them to wear electronic monitors, enforce curfews or impose a number of other restrictions that apply until their cases are resolved.

Sharlyn Grace, co-executive director of the Chicago Community Bond Fund, an organization that posts bond for people who are unable to pay it themselves, told the committee the system of cash bail has never worked the way it was intended.

“Requiring people to put up a sum of money to secure their release pretrial is based on habit and longstanding practice,” she said. “But every study that has looked at it has found that it doesn’t increase court appearance rates, and we know that continuing to use it has tremendous negative impacts – both the impacts of creating lost jobs, lost housing, for some people the risk of losing custody of their children because they’re unable to care for them. And also it increases recidivism, and it increases the racial disparities that are already prevalent in our criminal justice system.”

A number of law enforcement officials, however, said the 2017 law has had detrimental effects on their communities, and they warned of additional consequences if the state does away with cash bail altogether.

“You’ve essentially upended an entire system and not put in enough buttresses in place in order to protect from a lot of the fallout that happened,” said McHenry County State’s Attorney Patrick Kenneally.

He said there has been an 18% increase in the number of people who fail to appear in court after being released without posting bail in McHenry County.

Meanwhile, McDonough County Sheriff Nick Petitgout said doing away with cash bail would effectively defund a number of county services, including programs designed to help crime victims. That’s because when a person is convicted of a crime, any money paid for bail stays with the county and is applied toward fines, court costs and restitution.

“In our county, we take in roughly about a half million dollars in bond a year, and that money fuels our criminal justice system,” he said. “Things like victims services, court appointed special advocates, teen court, diversion programs, the treasurer’s office, the circuit clerk’s office, the sheriff’s office. There are many, many different parts of this system that rely on that money.”

“If there’s one thing I could impress upon you, it’s that not every county is like Cook County,” he said.

Rep. Justin Slaughter, a Chicago Democrat who chairs the House committee that deals with criminal law, is the lead sponsor of House Bill 3347, which would do away with cash bail in Illinois.

Meanwhile, Rep. Steven Reick, a Woodstock Republican, is the lead sponsor of House Bill 221, which would allow any county other than Cook to opt out of the 2017 Bail Reform Act.

And Rep. Patrick Windhorst, a Metropolis Republican, is sponsoring House Bill 912, which would scale back the 2017 law by exempting people who are charged with felonies that were committed while they were released on bond, in a pretrial release program, in pretrial detention, or serving a sentence of incarceration for a separate offense.