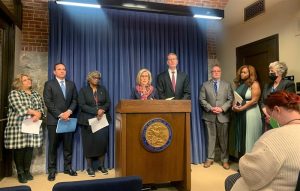 SPRINGFIELD – A group of Illinois senators were joined by officials from the Illinois Retail Merchants Association and state attorney general’s office at a news conference Tuesday, March 29 to outline an effort to combat organized retail crime.

House Bill 1091, a collaboration between IRMA and attorney general’s office, defines organized retail crime in law and adds requirements to the information third-party selling marketplaces would be required to collect from their sellers.

Sen. Suzy Glowiak Hilton, D-Western Springs, said the bill defines organized retail crime as when a person steals merchandise, either from a store or while the merchandise is in transit, with the intent to resell it.

It further defines the crime as when an individual “receives, purchases or possesses items for sale or resale knowing or believing the merchandise to be stolen” from a retail establishment, among several other narrow definitions of related criminal acts.

Offenses of organized retail crime could be sentenced at various felony that could include restitution.

The bill also provides the AG’s office the ability to prosecute through a statewide grand jury.

“Make no mistake, these crimes are not random,” Sen. John Curran, R-Downers Grove, said. “They are sophisticated, orchestrated events that exploit gaps in our criminal statutes to help fund gang activity and crime rates.”

Sen. Doris Turner, D-Springfield, said organized retail crime is more than just a Chicago issue and that it happens throughout Illinois.

Turner said it puts a damper on small business owners who are trying to rebuild the community and economy and that those owners have put in a lot of time, money and resources to do what they enjoy.

“When people are nervous to go to work, scared to go shopping or visit a mall or our small boutique shops in places like downtown Springfield, action needs to be taken to address our community concerns,” Turner said.

Monica Zanetti, owner of the Wild Rose Boutique in Springfield, said that as a small business owner who runs her shop alone, she fears smash-and-grabs. She said the measure is a comprehensive solution in combating retail theft.

Zanetti noted that although she does not experience retail crimes to the extent Chicago stores do, she has had individuals come into her store and take things then go to another store to try and sell what they stole.

The measure proposes that if a ring of smash-and-grab thefts happens across multiple counties, prosecutors would have the jurisdiction to consolidate charges against the offender in one county for all the smash-and-grab incidents.

The bill requires state funds to allow state prosecutors to investigate and prosecute retail criminal rings. Rob Karr, IRMA President said the necessary funding is about $5 million but those funds would need to be allocated separately in the state’s budget for fiscal year 2023.

Karr said the measure addresses organized retail crime from multiple angles and will, if funded, create a “statewide intelligence gathering and sharing platform” that will allow retailers and law enforcement agencies at the local, state and federal level to coordinate in addressing retail theft.

At a separate news conference, Gov. J.B. Pritzker said that he has yet to see the details of the bill but that he is looking forward to reviewing it.

The measure is part of a broader package of bills addressing crime being discussed in the General Assembly. Karr noted that IRMA has been in conversation with House Speaker Emanuel ‘Chris’ Welch and other House members regarding public safety bills.