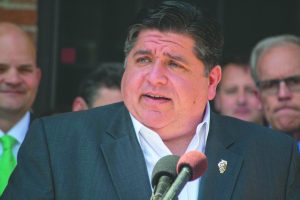 SPRINGFIELD – State officials in Illinois reacted with scorn this week to a legal filing in Sangamon County that challenges the constitutionality of two sets of bonds the state issued in 2003 and 2017 totaling $14.3 billion.

The complaint, by Illinois Policy Institute CEO John Tillman and the New York-based investment firm Warlander Asset Management, led by its founder and chief investment officer Eric Cole, seeks a court order blocking the state from paying off those bonds. It alleges that both bond issuances violate the Illinois Constitution’s limits on state borrowing authority.

A spokeswoman for Gov. J.B. Pritzker called the filing “not worth the paper it’s written on,” while Illinois Treasurer Michael Frerichs called it a “political stunt,” and Comptroller Susana Mendoza dubbed it a “ridiculous-on-its-face filing.”

The complaint was filed Monday in Sangamon County Circuit Court in two parts. The first is a petition by Tillman seeking permission to sue the state, something required under Illinois law; the second is a complaint by both Tillman and Warlander Asset Management, which holds about $25 million worth of other outstanding Illinois bonds.

The suit names Pritzker, Mendoza and Frerichs as defendants.

The complaint is based on Article 9, Section 9, of the Illinois Constitution, which gives the state authority to issue bonds “for specific purposes.” That article also places limits on short-term borrowing by the state.

The complaint argues that in both cases, the bonds were actually used to mask over financial deficits in the state’s general operating budget and therefore weren’t really for “specific purposes.”

Emily Bittner, Pritzker’s deputy chief of staff for communications, rejected that argument, saying in a statement that, “Several layers of bond counsel and Attorney General Lisa Madigan were required to sign off on bond offerings, and these met those standards.”

The Illinois Policy Institute is a nonprofit think tank that advocates for free-market policies, limited government and expansion of charter schools. Tillman, its CEO, has been an outspoken critic of the state’s financial policies for years, and for a time was a strong supporter of former Republican Gov. Bruce Rauner.

The timing of the legal challenge, coming on the first day of the new fiscal year, was conspicuous because the new budget plan lawmakers just passed allows for issuing $1.2 billion in general obligation bonds to pay down more of the state’s backlog of unpaid bills.

A spokeswoman for the Governor’s Office of Management and Budget said in an email that the bonds for paying down the bill backlog will likely be issued this fall.

Asked whether he intends to launch a similar challenge against the next round of state bonds, Tillman said in an email the lawsuit has nothing to do with the new fiscal year’s budget.

“The rationale behind the filing is based on our firm belief that the issuances of General Obligation bonds in two specific years — in 2003 & 2017 — are unconstitutional by not fulfilling the requirements in Section 9 of the Illinois Constitution,” he said.

Mendoza, however, suggested that the lawsuit is a deliberate attempt to scare capital markets and drive up interest rates that the state will pay.

“This is an extension of John Tillman’s and former Governor Bruce Rauner’s fantasy of pushing Illinois into bankruptcy so they could crush unions in Illinois,” she said in a statement. “They succeeded in lowering the state’s bond ratings and forcing Illinois taxpayers to pay higher rates on bonds, but they failed in every other regard.”