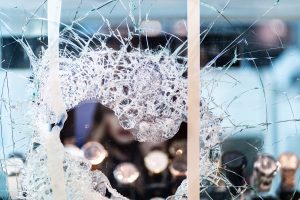 The measure would allow prosecutors the ability to consolidate charges against an offender in one county even if a ring of smash-and-grab thefts happen across multiple counties.

Editor’s note: This article is part of an ongoing “Session Recap” series in which Capitol News Illinois is following up on many of the more-than 200 measures that passed both houses of the Illinois General Assembly during the final week of spring session which adjourned at 6 a.m. April 9.

SPRINGFIELD – A measure aimed at addressing high-profile “smash-and-grabs” and other organized retail crime was among the scores of bills passed during the General Assembly’s final sprint toward it’s April 9 adjournment.

Its backers, among them the Illinois attorney general and the Illinois Retail Merchants Association, called it one of the strongest actions in the nation to define organized retail crime while increasing prosecutors’ ability to hold criminals accountable.

Republicans, for the most part, voted for the bill, but several GOP lawmakers called it watered down and removed their names as cosponsors after a late amendment was filed to appease crime victims groups and civil liberties organizations.

House Bill 1091, which will still need approval from the governor to become law, defines “organized retail crime” in state law with the intent of reducing offenders’ ability to avoid prosecution.

Sen. Suzy Glowiak Hilton, D-Western Springs, chief sponsor of the bill in the Senate, said it is aimed at trying to prevent “the big fish from coercing the small fish into stealing.”

Senate Amendment 4 changed the focus of the bill to identify ringleaders, or “managers,” of organized retail crime rings, creating greater penalties for them than for the low-level individuals who steal from stores and may be victims of human trafficking.

That amendment states an individual commits retail crime and is subject to a Class 3 felony charge when, “in concert with” another individual or group, the person “knowingly commits” retail theft from one or more retailers.

Committing assault or intentionally damaging property of the retail establishment would also fall under the definition. Anyone committing a battery as part of such a crime could be charged with a Class 2 felony.

A person is guilty of being a ringleader of an organized retail crime operation if they recruit individuals, supervise finances or direct others to commit retail theft with intent to resell merchandise that exceeds $300 in value. Ringleaders can also be found guilty if merchandise is stolen while in transit from the manufacturer to the retail establishment. 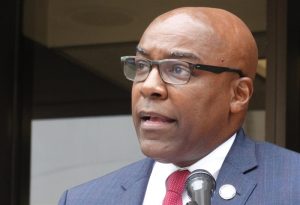 Ringleaders, or “managers” as they are called in the bill, would be subject to Class 2 felony charges.

After midnight in the Senate, HB 1091 passed 42-10, later passing the House 96-5 with Democratic Rep. Carol Ammons, of Urbana, and Chicago Reps. Curtis Tarver, Mary Flowers, Will Guzzardi, and Kelly Cassidy voting no.

During the House floor debate, Minority Leader Jim Durkin, a Western Springs Republican who voted for the measure, said he was disappointed the bill was “the best we could do.”

Durkin tied his argument back to a criminal justice reform passed by Democrats in January 2021 that Republicans have repeatedly seized on to call Democrats soft on crime.

Those repeated criticisms of the criminal justice reform known as the Safety, Accountability, Fairness, Equity-Today Act, have, to a large extent, driven some of the public safety-centric proposals pushed by Democrats this year, including the retail crime measure.

Durkin focused his arguments Saturday on the SAFE-T Act’s creation of a cashless bail system that does not take effect until Jan 1, 2023. Under the cash bail provision, bail bonds and conditions of bail will be replaced by a system of pretrial release to be developed by the Illinois courts based on a detainee’s alleged crime, their risk of not appearing for their court date, and the threat or danger they may pose to the community if released. 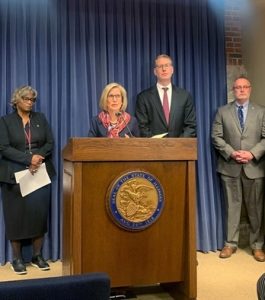 Durkin said that under the cashless bail provision of the SAFE-T act, offenders could be charged but released from custody to commit smash-and-grab thefts again.

“We’re not doing anything to discourage or deter the people who are destroying the River North (Chicago neighborhood), businesses on the South Side, the West Side, everywhere else in Chicago that have had to deal with this in the past year-and-a-half,” Durkin said.

Durkin praised a section of the bill which requires online marketplaces to keep records on sellers, but he said Amendment 4 watered the bill down.

The legislation requires third-party sellers to verify the user’s identity with a bank account number or other information to prevent stolen goods from being sold online. Third-party selling marketplaces, such as Amazon or eBay, would be required to suspend sellers who knowingly sell items that were stolen or are believed to be stolen.

The measure also allows the the state attorney general to call a statewide grand jury to prosecute organized retail crime.

“Organized retail crime is committed by sophisticated criminal enterprises that harm our communities in ways that extend beyond lost revenue and stolen products,” Raoul said in a news release. “These complex operations rely on thrift and resale of stolen products to fund and perpetuate the cycle of violence through even more dangerous illegal activities like trafficking drugs and firearms.”

Sen. Sue Rezin, R-Morris, noted concerns during a committee hearing that removing language pertaining to the 1970 organized crime-related Racketeer Influenced and Corrupt Organizations Act, or RICO, would weaken the bill.

But Rob Karr, IRMA President, said the statewide grand jury will be more efficient and give the same powers as the RICO law but on a smaller scale. 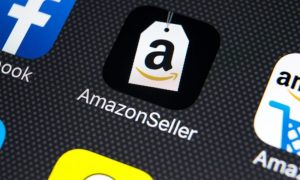 The legislation requires third-party sellers to verify the user’s identity with a bank account number or other information to prevent stolen goods from being sold online.

The measure would allow prosecutors the ability to consolidate charges against an offender in one county even if a ring of smash-and-grab thefts happen across multiple counties. A statewide grand jury will have the power to investigate, indict and prosecute violations of organized retail thefts.

“These are people who are stealing things and monetizing them and then using those monies to fund other illicit activities such as drugs, human trafficking,” Karr said in a follow-up interview after the subject matter hearing.

Victims of organized retail theft — including retail establishments — will have a right to at least seven days’ notice of all court proceedings under the bill.

While Senate Amendment 4 was filed in response to civil liberties and victims’ rights organizations who feared that some of the lower-level individuals committing retail crime may have been forced into it as human trafficking victims, Rep. Kelly Cassidy, D-Chicago, still opposed the final language.

She shared a story of how a police officer discouraged her mother from reporting her abusive father. She said the bill sends a message to survivors that retailers are more important than victims of domestic and gender-based violence.

Rep. Kam Buckner, a Chicago Democrat who sponsored HB 1091, said he filed HB 5748 to address the issues Cassidy brought up regarding domestic and gender-based violence. That measure would give other victims the same seven-day notice as outlined in the organized retail crime bill.

That bill was filed on Friday, April 8, and has not been considered in either chamber.