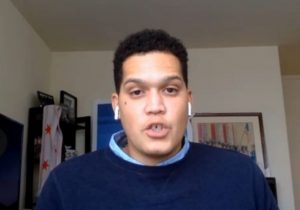 State Sen. Robert Peters, D-Chicago, is pictured in a file photo at a virtual committee hearing earlier this year. He is the Senate sponsor of a bill decriminalizing the transmission of HIV, which passed the Senate Tuesday, May 25. (Blueroomstream.com)

SPRINGFIELD — The Illinois Senate on Tuesday, May 25 passed measures decriminalizing the transmission of HIV and requiring public high schools to teach media literacy.

Both measures have already passed the House and will need only a signature from Gov. JB Pritzker to become law.

House Bill 1063 would eliminate existing criminal statutes that penalize HIV transmission as a Class 2 felony. If Pritzker signs the bill, Illinois would join 11 other states that do not have laws criminalizing the transmission of HIV, including Arizona, New Mexico and Texas.

HB 1063 also would repeal existing laws allowing law enforcement or state’s attorneys to access a person’s HIV status. Under current criminal law, a person who transmits HIV to another person can be charged with “criminal transmission of HIV.”

Current law prohibits the forced disclosure of a person’s HIV status but provides exceptions for law enforcement officials or state’s attorneys to subpoena or petition for the HIV status of criminal defendants.

The Illinois HIV Action Alliance, which lobbied for the bill, praised its passage.

“The truth is HIV criminalization never improved safety or public health in Illinois – in instead, it has only caused suffering to people living with HIV, their families, and their communities. It has promoted stigma and discrimination, and it has discouraged testing, treatment, and disclosure for decades,” the group wrote in a written statement Tuesday.

Sen. Robert Peters, a Chicago Democrat, sponsored the bill in the Senate, and Rep. Carol Ammons, an Urbana Democrat, was lead sponsor in the House.

It passed out of the Senate by a vote of 37-17 on May 25, and passed from the House last month by a vote of 99-9. It will head to the governor for his signature.

The Senate also joined the House in passing House Bill 234, which would require public high schools in the state to offer instruction in how to understand and evaluate news and social media as part of their computer literacy courses.

The requirement would begin in the 2022-2023 school year and would include instruction on accessing information across various platforms; analyzing and evaluating media messages; creating their own media messages; and social responsibility and civics.