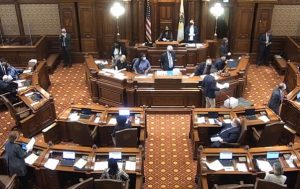 The Illinois Senate floor is pictured at the Capitol in Springfield. (Blueroomstream.com)

SPRINGFIELD – Capping off a slow legislative week as the General Assembly grapples with drawing redistricting maps, the state budget for the upcoming fiscal year and massive energy overhaul legislation, the Senate passed 14 bills Thursday, May 6 most of them unanimously.

“To protect our environment and stop global warming, we need to close coal plants – that’s not up for debate,” Bush said in a statement released May 6. “But, as we make strides toward green energy, we can’t forget about the families who rely on these plants to put food on the table or the communities that need their tax dollars to function.”

Areas that contained a coal or nuclear energy plant, coal mine, or nuclear waste storage facility are eligible to become one of these energy transition zones.

Companies involved in the production of green energy, defined in the statute as solar, wind, water, geothermal, bioenergy or hydrogen fuel, qualify as businesses that can benefit from the zones. These businesses gain a number of tax advantages from working in these areas, including exemption from state and local taxes on gas and electricity, as well as being exempt from use and occupation taxes when they purchase buildings in the zone for energy production.

The bill was one of the few which saw opposition, passing 46-11. It will head to the House.

The Senate also passed Senate Bill 147, amending the state’s insurance code regarding the subject of Medicare. The legislation would create a new Medicare enrollment period for Illinois residents between ages 65 and 75, coinciding with their birthday.

Each year, residents will be entitled to an open enrollment period of 45 days starting on their birthday that allows them to buy a Medicare supplement policy with equal or less benefits than their current Medicare plan.

During this enrollment period, companies that offer those supplemental policies would be unable to deny or change the pricing of coverage due to health status, previous claims or medical conditions. Those companies also would be required to give notice of this enrollment period annually to policy holders, overseen by the Illinois Department of Insurance.

The measure passed 54-0 and will head to the House for further consideration.