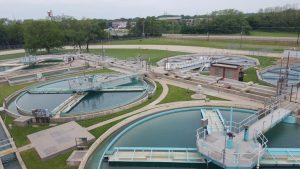 The Community Development Block Grant program for 2020 is estimated to benefit around 113,266 Illinois residents by funding water and sewer upgrades and repairs in low-income, rural communities. (Illinois EPA photo)

SPRINGFIELD – The Illinois Department of Commerce and Economic Opportunity announced a total of $18.2 million in grants will be awarded to 34 southern Illinois and rural communities facing threats to health and safety because of infrastructure issues.

The Community Development Block Grant program for 2020, funded by the U.S. Department of Housing and Urban Development, is estimated to benefit around 113,266 Illinois residents by funding water and sewer upgrades and repairs in low-income, rural communities.

The repairs must be made to shared water and sewer infrastructure with the intent of enhancing safety and quality of life for those within the eligible cities and towns.

“Every community deserves clean water and reliable sewer service,” Gov. J.B. Pritzker said in a news release. “The 2020 Public Infrastructure grants program will…invest in the community, create jobs, and lay the groundwork for even more revitalization down the road.”

Last year the program received 50 percent more applications than it did the previous year, which DCEO Acting Director Sylvia Garcia said speaks to the program’s necessity.

“I think there’s a backlog of infrastructure investment across the country when we look at things, but I think in particular in downstate and rural communities,” Garcia said in an interview. “There’s a lot of critical life safety projects out there that really need to be funded.”

Village of Tampico Mayor Kristine Hill, a grantee of the program, said her community is facing major issues with its infrastructure, specifically its storm sewer system.

“Our system is quite old to begin with, but then during the flooding of 2019, the groundwater infiltrated our storm source and overloaded our system which caused us to have emergency pumps running and backing up into people’s homes,” Hill said in a phone interview. “It was just quite a mess for many of our residents.”

According to Hill, the issue has been a burden on residents of Tampico, a village of less than 800 residents which Hill said does not have surplus tax revenue to address the problem. The sewer back up, she said, could potentially cause more damage to homes if the problem continues to go unresolved.

“Coming out of a pandemic, a lot of people have lost their jobs, we can’t turn to them and raise the utility costs to try and cover this at this time,” Hill said. “Without this help, we couldn’t move forward and help our community.”

Tampico received the maximum grant amount of $550,000 which will go toward the rehabilitation of its sanitary sewer system, as well as protective lining for storm sewers and manholes.

The block grant program prioritizes projects in rural and underserved communities or opportunity zones, which are economically-distressed communities that may qualify for tax deferment, with 51 percent or more low-to-moderate income residencies.

Some of the other grantees include Canton, Toluca, Verona, Broughton, Elliott and Ottawa.

These projects are designed to eliminate conditions detrimental to public health, safety and welfare.

“We’re seeing on the federal level a discussion about a large infrastructure bill and I think the type of improvements that we’re able to see in communities across Illinois through this project is exactly why an infrastructure bill is needed,” Garcia said.

Applications for the 2021 program are open now with another $18 million available for public infrastructure projects. The deadline for communities to apply is Aug. 3, 2021. More information can be found on DCEO’s website.