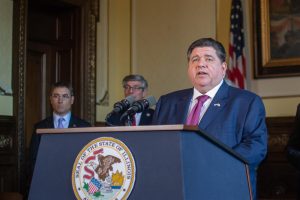 Gov. J.B. Pritzker announces a plan in his Capitol office Tuesday, Nov. 29 to pay down the state’s remaining Unemployment Insurance Trust Fund debt. He was joined by lawmakers of both parties, including Republican Reps. Mike Marron and Dan Ugaste, both pictured. (Capitol News Illinois photo )

SPRINGFIELD – Lawmakers on Tuesday, Nov. 29 announced a bipartisan plan to use state revenues to pay down the remaining $1.4 billion in debt taken on by the state’s Unemployment Insurance Trust Fund amid the COVID-19 pandemic.

Part of the agreement is expected to move through the General Assembly this week before lawmakers adjourn for the year. It would increase an employee’s “taxable wage base” – which is the amount of an employee’s wages for which an employer must pay unemployment taxes – by 2.4 percent for each of the next five years. It would also increase the target balance of the fund’s reserves from $1 billion to $1.75 billion.

It does not decrease the number of weeks or maximum amounts of benefits an unemployed person can receive.

“This bipartisan agreement eliminates the final portion of the $4.5 billion of debt forced upon our state during the pandemic,” Gov. J.B. Pritzker said at a news conference Tuesday in his Capitol office. “It will save Illinois businesses hundreds of millions of dollars over the next decade, and it will save taxpayers $20 million in interest costs that would otherwise have been due next September.”

A $1.8 billion state cash appropriation – the funding backbone of the bipartisan agreement between business and labor – would be included in a supplemental funding plan to spend the current year’s anticipated budget surplus. That action won’t come until some time next year as lawmakers look to spend an estimated surplus of about $2.9 billion for the current fiscal year, which ends June 30, 2023.

It’s the final step in paying down approximately $4.5 billion in debt to the federal government that the state’s unemployment trust fund incurred since 2020, when the COVID-19 pandemic and associated stay-at-home orders shut down the state’s economy and sent unemployment rates skyrocketing. 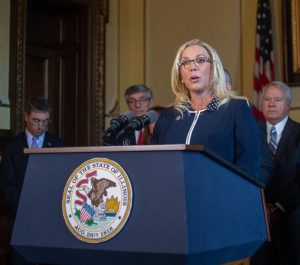 Pritzker was flanked by several Republicans, including Sen. Sue Rezin, R-Morris, who has been a Senate unemployment negotiator for 12 years. She said the stability the bill offers is important for businesses and those claiming unemployment.

“So ,you know, all in all, we understand that some people may not like this, but considering where we were, in unprecedented times after the pandemic, this is a good bill,” Rezin said. “The majority of the states went through this entire process as well.”

Business and labor groups also praised the plan which was born from months of negotiations.

“Not only will this proposed legislation wipe out the existing debt caused by the pandemic, it also provides structural unemployment insurance funding reforms that will provide greater solvency for the trust fund now and in the future,” Pat Devaney, secretary treasurer of the AFL/CIO labor organization and a lead labor negotiator on the bill, said at the news conference.

The unemployment trust fund is generally funded by the state’s businesses through insurance premiums collected via payroll taxes.

Over the next five years or more, the agreement announced Nov. 29 is expected to save businesses from approximately $915 million in tax increases they would have otherwise seen had the state not taken any action.

That’s according to Rob Karr, president and CEO of the Illinois Retail Merchants Association, who was one of the lead negotiators on the business side of the bill. 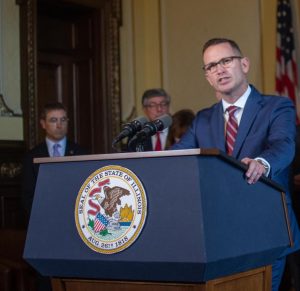 Karr said the state’s cash infusion, which will pay down nearly $1.4 billion in debt to the federal government and create a balance of about $450 million, will alleviate tax pressures on businesses by decreasing a key metric that drives the complex statutory formula which sets employer insurance rates.

Even with the latest announced action, Karr said, Illinois businesses are likely to see an increase of $114 million for the upcoming fiscal year. That’s because the state missed a Nov. 10 deadline that would have prevented it from becoming a “credit reduction state” in the eyes of the federal government.

What that means is a Federal Unemployment Tax Act tax credit for Illinois businesses will decrease by 0.3 percent, resulting in an increase of $21 in federal taxes per employee.

But, Karr said, if the actions announced by lawmakers this week become law, those increased tax payments from Illinois businesses will be directed to the state’s trust fund balances, rather than to the federal government.

Also as part of the agreement, the $450 million in state revenue to supplement the trust fund balance will be in the form of a no-interest loan. It is to be repaid over 10 years as a deposit in the state’s “rainy day” fund, which has its highest-ever balance over $1 billion.

The announcement follows a Nov. 14 report from the Governor’s Office of Management and Budget which projected a $2.96 billion surplus for the current fiscal year and a modest surplus in the following fiscal year. That report estimated the state would return to a deficit of about $384 million in the following year, Fiscal Year 2025, if changes are not made to current law.

The governor’s office said in a Nov. 14 news release he would like to see that surplus fund another $1.3 billion deposit into the state’s “rainy day” fund, along with the trust fund payment and allocating revenues to pay down approximately $500 million in bonds issued during the Great Recession.