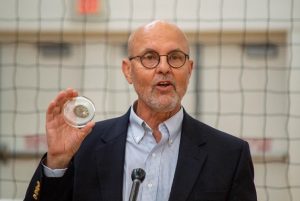 Sen. Dave Koehler, D-Peoria, speaks at a news conference Tuesday, Aug. 17 in Springfield, holding a specimen of penicillium rubens, which was discovered in Peoria in the 1940s and named the official state microbe in Illinois this week. It’s a specimen used to widely distribute the antibiotic penicillin. (Capitol News Illinois photo by Jerry Nowicki)

SPRINGFIELD – Lawmakers gathered Tuesday, Aug. 17 at the University of Illinois Springfield to designate a new state microbe and add agriculture sciences to the list of courses that fulfill admissions requirements at state universities.

While the first mold spore that produces penicillin was discovered in Europe in 1928, the National Center for Agriculture Utilization in Peoria, known as the Ag Lab, was the site of the penicillium rubens discovery in the 1940s which allowed for speedier production of the antibiotic used to treat several infections.

Peoria Democrat Sen. Dave Koehler, who sponsored the bill in the Senate, noted penicillin’s contribution to halting bacterial infections such as gangrene in soldiers wounded in World War II.

“There was no way to treat it,” Koehler said while holding up a specimen of the mold discovered in Peoria. “Penicillin stopped that.”

“Not only did the mass production ofpenicillin in Peoria change the world by helping us win World War II and saving countless lives across the globe, but it also provided an important recipe that I think we should follow here in Illinois today,” House sponsor Rep. Ryan Spain, R-Peoria, said at the news conference. “Currently, as many investments in our country for research and development have migrated to the East and West Coast, this recognition today in this bill signing is a reminder that there is a place for discovery and implementation here in Illinois.”

Spain announced stakeholders from his hometown in Peoria are launching a “comprehensive effort to return bio manufacturing and pharmaceutical mass production to central Illinois,” known as Peoria Bio-Made.

“We are collaborating with leading biotech entrepreneurs in San Diego and Boston to bring discoveries from the coast back to Peoria for last-mile testing and full scale production,” he said.

Pritzker also took time to recognize Mary Hunt, known as “Moldy Mary,” who was a researcher at the lab who collected and tested mold samples, including the moldy cantaloupe that led to the discovery of the more easily cultured penicillium strain.

“These young people who are taking agricultural science, it allows them to meet the science requirements in high school, so as they move through college, they’ve got that background,” Sen. Elgie Sims, D-Chicago, who sponsored the bill, said at the news conference. “So it allows them to expand their horizons; again, it opens up all those pathways to success.”

“This expansion of agricultural education options was made possible by students, teachers, FFA clubs and lawmakers coming together to ensure that high school students in Illinois can access the tools they need to continue our proud Illinois agriculture tradition,” he said.