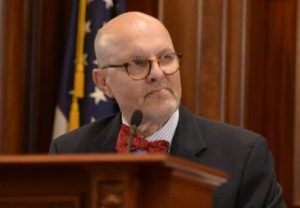 State Sen. Dave Koehler, D-Peoria, has introduced legislation to reduce state payments to the insurance companies that manage Illinois’ Medicaid program, arguing that the COVID-19 pandemic is resulting in excess profits for the insurers. (Senatordavekoehler.com)

SPRINGFIELD – Two Democratic lawmakers have introduced legislation to reduce state payments to the insurance companies that manage Illinois’ Medicaid program, arguing that the COVID-19 pandemic is resulting in excess profits for the insurers.

Sen. Dave Koehler, of Peoria, and Rep. Fred Crespo, of Hoffman Estates, say that money saved due to the pandemic could be used to help struggling downstate hospitals whose resources have been strained by excess hospitalizations and low revenue.

“While insurance companies and managed care organizations see record-setting profits at the height of a global pandemic, rural communities across the state are experiencing unsustainable strain in their health care systems due to lack of resources,” Koehler said in a statement Wednesday, Dec. 9. “The money recouped through this legislation would provide immediate relief for Downstate hospitals that have been devastated by COVID-19.”

The Illinois Medicaid program operates under a “managed care” model in which private insurance companies, known as managed care organizations, or MCOs, are paid a flat rate for managing the care of each Medicaid patient. Their profit margin is the difference between how much they are paid and how much they have to spend reimbursing health care providers for the patients’ care.

Koehler and Crespo argue that patient demand for other, routine, nonemergency medical services like outpatient procedures has plummeted amid the pandemic. In contrast, the insurance companies that manage the program have continued to receive the same per-patient monthly rates for managing the care of each Medicaid recipient, resulting in higher profit margins.

On Dec.10, the two lawmakers filed companion bills in the General Assembly, Senate Bill 4207 and House Bill 5867, which call for reducing the enrollment-based payments by 20 percent for the duration of the COVID-19 disaster declaration.

In addition, the bill would effectively make the reduced rates retroactive by reducing future payments on a prorated basis to claw back a portion of the rates that have already been paid out since the disaster declaration went into effect March 9.

Koehler said Illinois spends roughly $1.7 billion per month for MCO payments, so a 20-percent reduction would reduce that by $340 million.

Because the General Assembly is not currently in session, the bills have not yet been assigned to committees. However, the organization that lobbies for the MCOs has already begun pushing back against the plan, arguing that it’s based on a false premise that utilization rates have actually decreased.

“There were significant decreases in utilization in April and May; however, by July utilization had rebounded,” Samantha Olds Frey, CEO of the Illinois Association of Medicaid Health Plans, said in a statement. “It is important to note that MCOs don’t just pay for hospital visits but a comprehensive healthcare benefit; such as: pharmaceuticals, long term care, and behavioral health. We recognize there may be individual provider partners with decreased utilization, but with the expansion of telehealth and the reinstatement of elective procedures health care utilization has stabilized.”

Koehler said in an interview Friday, Dec 11 that he expected resistance from MCOs, but he said he believes the plan has support within the heath care provider industry.