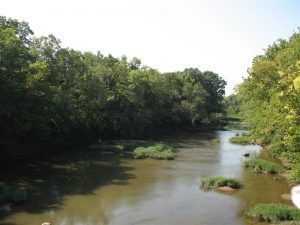 The Mazon River near Coal City in Grundy County. (Photo courtesy of NOAA)

SPRINGFIELD – The Illinois Supreme Court has ruled that the public has no right to boat, fish or swim in small rivers that flow across private property, but two justices are urging the General Assembly to change that law.

“The legislature should redefine navigability to be more inclusive because that would promote the State’s interest in recreational uses of waterways for all citizens of the State of Illinois,” Justice P. Scott Neville, joined by Chief Justice Anne Burke, wrote in a separate opinion to a recent case. “It is incumbent upon the legislature to realize that there is an increasing social and economic need that riparian rights be restricted for public recreational purposes.”

That was part of a concurring opinion in a recent decision involving a dispute between two landowners who own property along the Mazon River in Grundy County.

A portion of that river flows through a fossil-rich area known as the Mazon Creek Fossil Beds, a national historic landmark near the river’s confluence with the Illinois River, and both parties in the case operate fossil-hunting businesses.

Adam Holm and his family own two separate parcels of property, one of which is landlocked and only accessible from the river. To get to that parcel, he would launch a kayak from his other property and row down the river, taking him across property owned by Peter Kodat and others.

Kodat complained, accusing Holm of trespassing on his property, but Holm claimed that as the owner of property along the river, he had a right to access all parts of the river. 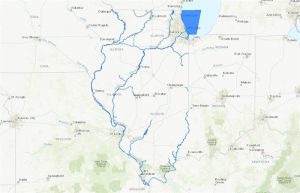 Only 32 rivers and streams in Illinois are considered “navigable” and thus open for public use, but two state Supreme Court justices argue that it’s time to change that law. (Courtesy of llinois Department of Natural Resources)

The case centered around an Illinois law that gives property owners the right to control access to waters along their property, unless the waters are classified as “navigable,” which, according to an earlier Supreme Court decision, means “of sufficient depth to afford a channel for use for commerce.”

In other words, unless a body of water is deep enough to carry barge or ship traffic, property owners along that water have a right to bar public access to it.

The Illinois Department of Natural Resources is the agency that determines whether or not a lake, river or stream is navigable. It currently lists 48 bodies of water, including Lake Michigan and six branches of the Chicago River, as falling in that category.

Thus, in a unanimous decision, the court said Kodat had the right to prohibit Holm from kayaking on the portion of the river that flows across his property.

“In our view, the legislature is the best venue to consider plaintiffs’ request for the creation of a new public policy on riparian rights for nonnavigable rivers and streams in Illinois, which constitute the majority of waterways in this state,” Justice Robert L. Carter wrote for the majority.

But writing in what’s known as a “special concurrence”— in which a justice agrees with the outcome of a case but not the opinion — Neville wrote that he thinks it is time to change the law.

Neville argued that the doctrine used in Illinois, known as the “Riparian Doctrine,” that gives property owners the right to control access to rivers and streams that flow across their property is “archaic and anachronistic” and should be replaced with one that recognizes the public’s right to use those resources for recreation.

He also argued that the riparian doctrine has hindered Illinois from developing more recreational use of waterways, noting that there are “more than 87,000 miles of rivers and streams within its borders, but only 32 rivers and streams are classified as navigable.”

“There is no question that the adoption of the recreational navigation doctrine is supported by Illinois public policy favoring the use of waterways for recreational purposes,” Neville wrote, citing a 1976 case in which the court blocked the sale of a portion of Lake Michigan in Chicago to U.S. Steel Corp. for the purpose of developing a steel plant there. “According to this court, it is appropriate to observe that there has developed a strong, though belated, interest in conserving natural resources and in protecting and improving our physical environment.”