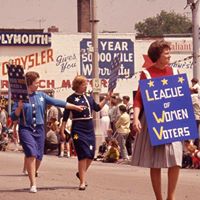 Members of the League participate in the 1964 Elmhurst Memorial Day Parade. (LWV photo)

Mary Kubasak has been part of the League of Women Voters of Illinois for nearly half of the organization’s existence.

Kubasak has been part of the voter information organization, which will mark its centennial on Friday, Feb. 14, for 49½ years.

“I went to meetings before I was born,” she said. “My mom was president of the (south suburban) Riverdale League. I grew up in the League.”

On Friday, the League of Women Voters will celebrate 100 years as a grassroots, nonpartisan civic organization. The celebration will be in the Gold Room of the Congress Plaza Hotel in Chicago, the very room in which the League was founded in 1920.

Anne Jamieson, president of the League of Women Voters of Chicago, was also taught civic involvement at a young age.

“I remember my mom going into the voting booth and me sitting at her feet while she voted; and I remember being in the stroller and her telling me about Alice Paul being force fed (during her hunger strike for women’s suffrage),” Jamieson said. “My mother taught me what in life is important.”

Paul advocated for and helped guarantee passage of the 19th Amendment to the U.S. Constitution, granting women the right to vote. Paul next authored the Equal Rights Amendment in 1923, which has yet to be adopted.

Kubasak, who served as president of the Illinois League for four years, said the right to vote is something that all Americans should cherish. 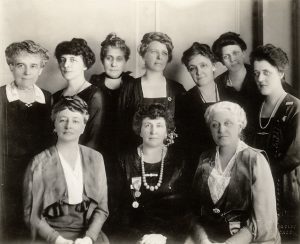 Members of the League of Women Voters of Illinois gather at the organization’s founding in February 1920. (LWV photo)

“I just believe that everyone should vote. It is such a strong and important thing. It doesn’t matter if you are liberal or not liberal,” Kubasak said. “To not take advantage of that is sad. When I was a girl, I remember seeing people strapping themselves to cars in East Germany to try to get to freedom. And we are just like, ‘Whatever,’ when it comes to voting.”

The League member said she is disheartened when she hears young people say they aren’t voting in election because it is pointless.

Jamieson, who oversees the Chicago chapter’s 300 members, also gets upset when she hears people talk about sitting out an election.

“When I hear people say they are not going to bother voting in the primary, I tell them, ‘People have died in an effort to do that,’” she said.

“It can be frustrating trying to vote on a Tuesday,” the Chicago League president said. “I grew up in Michigan where the only way to get an absentee ballot was to explain why you couldn’t vote on Tuesday.”

She said it is frustrating that Illinois has so many ways for people to register to vote, but turnout still is low for elections.

“Other states don’t have those options so that can be frustrating,” Jamieson said. “It is something states should look into.” 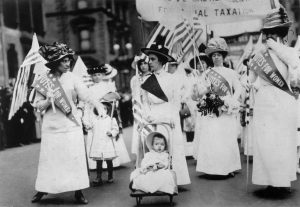 League members take to the streets during the organization’s early years. (LWV photo

Both Kubasak and Jamieson stressed the organization is nonpartisan, even though some of the issues the group takes up may break along party lines.

“We take a stance on issues that some people may perceive as political, such as climate change,” Jamieson said. “One party makes it political when it says there is a lack of scientific evidence about climate change.”
Kubasak said when she was president of the Illinois League, the organization worked hard for redistricting, an issue opposed by state Democratic leaders.

“On other issues, things are completely reversed,” she said. “If both sides are mad at you, you are probably doing something good.”

Jamieson said the League continues to adapt to try to draw younger members, noting that many units hold their meetings during evening hours instead of during the day the way it used to be.

“If we want to have another 100 years, we need people from all different age groups,” Kubasak said. 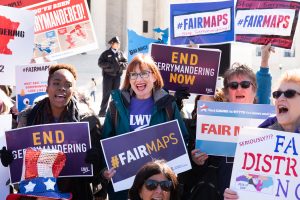 Fair maps for legislative districts has been a rallying cry for the League. (LWV photo)

She said that people who think they don’t have the time to be active in League members should still be members.

“When we are lobbying for things, we say, ‘There are 9,000 League members that want blah, blah, blah,” Kubasak said. “If you can’t go to Springfield, we will go on your behalf. There is strength in numbers.

“Who knows? Maybe you will like it and get more involved. I’ve had friends who’ve joined and said, ‘I’ll just send a check.’ Then after a while, they are going to rallies and making calls about issues.”