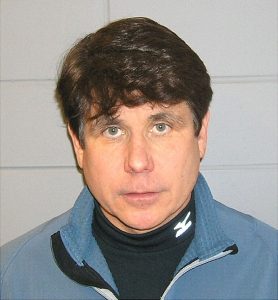 Former Illinois Gov. Rod Blagojevich is shown here in this mug shot taken by the U.S. Marshals Service in Chicago after his arrest in December 2008.

“Yes, we commuted the sentence of Rod Blagojevich,” Trump told reporters Feb. 18 before boarding Air Force One. “He served eight years in jail, a long time. He seems like a very nice person, don’t know him.”

Blagojevich, who was a contestant on Trump’s “Celebrity Apprentice” television program in 2010, began serving a 14-year federal prison sentence in 2012. He was convicted on 11 criminal counts related to his effort to sell the U.S. Senate seat vacated by Barack Obama when he became president.

Illinois House Republican Leader Jim Durkin, of Western Springs, called Trump’s decision “disappointing” and said he was “never going to be able to figure out how the president messages, nor the decision making that he does.”

“Currently we have a massive federal investigation into corruption in the state of Illinois, and this action distracts and also dilutes what I think is the proper role of the Department of Justice to root out corruption,” he said.

In a statement, Gov. J.B. Pritzker, who has argued on several occasions that Blagojevich should serve his full sentence, echoed that sentiment.

“Illinoisans have endured far too much corruption, and we must send a message to politicians that corrupt practices will no longer be tolerated,” he said in the statement. “President Trump has abused his pardon power in inexplicable ways to reward his friends and condone corruption, and I deeply believe this pardon sends the wrong message at the wrong time. I’m committed to continuing to take clear and decisive steps this spring to prevent politicians from using their offices for personal gain, and I will continue to approach this work with that firm conviction.” 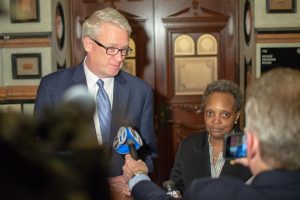 Blagojevich was also convicted on six counts related to campaign contribution shakedowns, including one count, which said he essentially tried to trade $8 million in added state funding to pediatric specialists for a $25,000 campaign donation from a hospital CEO.

In 2015, five of those counts were thrown out in appellate courts, although his 14-year sentence was re-imposed months later.

Durkin was involved firsthand with the bipartisan effort to impeach Blagojevich in January 2009.

“I saw a governor who was rogue on steroids,” he said. “He didn’t care about the state of Illinois, he cared about his own ambition and he abused the office, and the Legislature did the appropriate thing, the federal courts did the right thing, not only at the district court level but also the appellate court and U.S. Supreme Court and they said his sentence was appropriate.”

Durkin questioned why Blagojevich should get “special treatment” when others who are imprisoned for drug offenses receive decades in prison without relief from presidential pardons.

“It’s just because of the celebrity of Rod Blagojevich,” Durkin said. “I think it’s wrong and it sends a bad message to people in this country that … you don’t have to pay your debt to society.”

U.S. Rep Darin LaHood, a Republican and honorary co-chair of Trump’s Illinois re-election campaign, said in August that he spoke to the president and encouraged him not to commute the sentence.

On Feb. 18, LaHood and the other members of Illinois’ congressional delegation — John Shimkus, Adam Kinzinger, Rodney Davis and Mike Bost — released a statement expressing their disappointment in Trump’s action.

“We believe (Blagojevich) received an appropriate and fair sentence, which was the low end of the federal sentencing guidelines for the gravity of his public corruption convictions,” they said in the statement. “Blagojevich is the face of public corruption in Illinois, and not once has he shown any remorse for his clear and documented record of egregious crimes that undermined the trust placed in him by voters. As our state continues to grapple with political corruption, we shouldn’t let those who breached the public trust off the hook. History will not judge Rod Blagojevich well.”

U.S. Sen. Dick Durbin, who said in 2018 he would support a shortening of Blagojevich’s sentence, released a statement in which he did not specifically say if he agreed or disagreed with Trump’s action.

“Former Governor Blagojevich betrayed the people of Illinois and engaged in a pattern of corrupt behavior for which he was held accountable and which cost him more than seven years of freedom,” Durbin said in the statement. “At a time when corruption by elected officials is still in the headlines, Illinois and Washington should move quickly to establish stricter ethics requirements, including the full detailed disclosure of income, net worth, and income tax returns by all elected officials.”