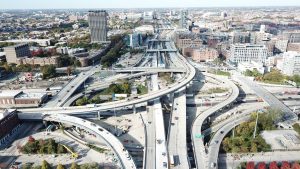 The Jane Byrne Jane Byrne Interchange project in Chicago is in its final phase with reconstruction of the Interstate 90/94 mainline. (Photo courtesy of IDOT)

Illinois Department of Transportation Secretary Omer Osman says the state completed some historic projects in 2021 while outlining progress on projects continuing into this year through the Rebuild Illinois capital program.

He also touted projects that will begin in 2022.

“This past year was perhaps the most eventful in the history of IDOT,” Osman said in a Dec. 28 release from IDOT.  “Because of Rebuild Illinois, we made history in 2021 with generational improvements to highways, bridges, rail, transit, waterways, airports as well as bike and pedestrian infrastructure. We head into 2022 prepared to build an even safer, more equitable transportation system for all of Illinois.”

IDOT managed approximately $2.4 billion in improvements to 1,314 miles of highway and 142 bridges, as well as 194 safety improvements, in the 2021 fiscal year — the second full year of the Rebuild Illinois program.

The year also brought new investments that promise to strengthen multimodal connections, according to IDOT.

Additionally, with the federal Infrastructure Investment and Jobs Act passing last month, Illinois is estimated to receive about $17.8 billion over the next five years, ensuring the investment in a multimodal transportation system for many years to come, according to Osman.

One of six bridges spanning the Illinois River in the Peoria area, the $167 million McClugage Bridge project ended the year about 40 percent complete. (Photo courtesy of IDOT)

The new $1.2 billion Interstate 74 Mississippi River bridge in the Quad Cities opened to traffic Dec. 3 following four years of construction and a ribbon-cutting led by the governor.  A joint project with Iowa, the bridge is one of the biggest projects in state history.

Construction wrapped up on expanding I-80 to six lanes between Interstate 355 and U.S. 30 in Joliet and New Lenox.

The work was tied to the reconstruction of the U.S. 30 interchange and a prelude to six-year plan to rebuild 16 miles of I-80 — a $1.2 billion project that is currently in progress. In Champaign-Urbana, construction began on rebuilding the I-57/74 interchange.

The $216.8 million project replaces the more than 50-year-old original interchange and will provide safer and more efficient movement of freight and people.

Work advanced on replacing the eastbound McClugage Bridge that carries U.S. 150 in Peoria. One of six bridges spanning the Illinois River in the Peoria area, the $167 million project ended the year about 40 percent complete. The new structure will improve capacity, increase safety, reduce travel times and provide multimodal access with bicycle and pedestrian accommodations.

Chicago’s Jane Byrne Interchange project entered its final phase with reconstruction of the Interstate 90/94 mainline. Work will add lanes, reconstruct several exit ramps and build a new collector-distributor ramp on the east side of the expressway for the array of downtown exits before the project substantially wraps up in late 2022.

In far Southern Illinois, work will be underway in January on a $67.6 million expansion of nine miles of I-57 north of Illinois 149 to south of Illinois 154. The project continues the ongoing effort to expand I-57 from four to six lanes in West Frankfort. 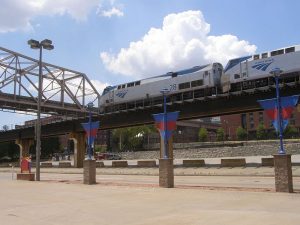 The State of Rail

Lincoln Service, Carl Sandburg/Illinois Zephyr and Illini/Saluki state-supported Amtrak trains resumed full service in July after being limited due to COVID-19. In November, communities along the Illinois Zephyr celebrated the 50th anniversary of the service connecting Chicago and Quincy. Ground was broken on a new federal and state effort with several railroads to reconfigure an outdated network of tracks and signals while replacing the 97-year-old Lenox Tower in the Metro East.

The project, expected to conclude in 2022, is modernizing rail operations, safety and mobility. In December, a new schedule was implemented for Lincoln Service trains to reflect higher 90 mph speeds as a result of improvements made along the Chicago-St. Louis corridor.

Work continues toward the ultimate goal of increasing speeds to 110 mph by 2023. Testing of the new Siemens Venture passenger rail cars occurred, with the cars expected to go into service in early 2022 in Illinois and other Midwest states.

Downstate transit providers were asked to submit project ideas as part of the second round of the Rebuild Illinois Transit Capital Grant Program, which is set to distribute almost $110 million next year for projects outside the Chicago area.

Rebuild Illinois identifies a total of $4.5 billion — $3 billion in bonding and $1.5 billion in new pay-as-you-go funding – to invest in transit throughout the state. Proposals from public port operators also were sought to distribute almost $110 million in funding via Rebuild Illinois to modernize and revitalize the state’s marine transportation system. The winning submissions are anticipated to be announced in early 2022. The start of the Port Facilities Capital Investment Grant Program coincided with the release of IDOT’s new Illinois Marine Transportation System Plan, which determined the state’s ports create $36 billion in economic activity annually and support 160,000 jobs.