SPRINGFIELD — Illinois lawmakers took several steps this legislative session to increase efficiencies in the state’s Medicaid managed care system, which has been widely panned by high-volume Medicaid providers since its inception in 2011.

The negotiations included insurers, health care providers, government regulators and lawmakers, and all sides expressed optimism about a bill which was approved unanimously in both chambers and awaits action from Gov. J.B. Pritzker.

“There’ll be a lot more reporting requirements, a lot more transparency on what’s actually happening,” Steans said. “One thing we’re doing, for example, right now we get different information from providers, MCOs and the Department of Healthcare and Family Services about what claims are actually being denied. There’s not a similar data set that’s available.”

Under the managed care system, insurance companies are paid a flat, per-patient monthly fee to manage the care of most Medicaid recipients. These MCOs are required to reimburse health care providers and make sure patients receive follow-up care.

But critics have argued that MCOs are merely managing costs through excessive denials of claims and delayed payments.

“We pay $14 billion of state dollars to managed care organizations and have a blind spot,” Mendoza said. “Once that money goes out my door, I have no idea when they’re paying the vendors, and the vendors keep calling my office and saying ‘When am I going to get paid?’ and all I can say is ‘I already paid you.’ But by law, I have to pay the managed care organizations who then trickle the money down.” 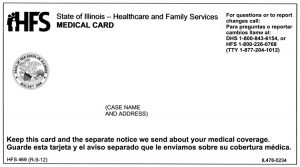 Steans said denial rates can’t simply be blamed on MCOs, however, which is why one of the goals of the omnibus package was to bring all sides to the table to find greater efficiencies. One solution was giving the DHFS a greater role in coordinating claims and providing a one-stop database that will help determine what is causing denials.

The bill also lays out parameters of a DHFS-run complaint portal where providers can challenge denials. It requires DHFS to work with stakeholders to “enhance and improve operational performance” of the managed care system, and creates a dispute resolution process in which DHFS has final say over whether a claim denial is permissible.

It also creates an “expedited provider list” to speed payments to health care providers with the greatest financial needs, establishes late payment interest penalties when an MCO does not pay a provider within 30 days of receipt of the claim, and requires the DHFS and MCOs to work toward the creation of consistent billing practices to be applied across MCOs.

Patrick Gallagher, senior vice president of health policy and finance at the Illinois Health and Hospitals Association, said greater involvement from DHFS is a welcome change.

“I do think that this sets the stage for the state providing greater oversight of the MCOs, because what needs to happen is to have all these billing issues resolved,” Gallagher said. “You’re always going to have a certain level of denials, but you can’t have the levels of what we’ve been seeing where hospitals have had to hire staff just to chase down these payments.”

Managed care organizations supported the collaborative process as well, according to Glenn Harston, who represents the Illinois Association of Medicaid Health Plans.

“While we disagree with the characterization of 26 percent denial rates, we do agree with providers that more can and should be done to ensure that providers and plans are talking with one another and not at one another,” Harston said. “The leadership at (DHFS) has made significant progress in bringing the stakeholders together to focus on billing issues and to ensure we discuss how we can collectively improve the program for Medicaid members.”

“If somebody’s sitting in a nursing home, their circumstances probably aren’t changing, and they’re probably still eligible for Medicaid. So why do we make it complicated and require a lot of information for them to have to fill out?” Steans said. “So that was one of the things we’re doing is trying to facilitate getting as much automation done in the redetermination process as possible.”

She said Illinois’ low Medicaid reimbursement rates received a bump this legislative session because of an assessment, or tax, on managed care organizations that brought more funding into the Medicaid system and freed up approximately $530 million of general revenue spending. It also allowed for a greater draw down of federal matching dollars while preventing MCOs from passing the fee onto consumers.

“IAMHP was supportive of the Managed Care Assessment as it brought in much needed funding and stability to the Medicaid program,” he said. “The assessment will generate a tax of $1.2 billion plus additional federal dollars amounting to a near $2 billion investment in the Medicaid program.”

John Hoffman, a spokesman for DHFS, said the department “has been implementing a range of enhancements to help providers better serve Medicaid members and to correct for program components that were inadequately developed under the previous administration.”

“The Department has an obligation to make sure this program runs as efficiently as possible, and we will actively engage the full scope of available tools to address provider and other concerns promptly and appropriately with strong and vigorous oversight,” Hoffman said.