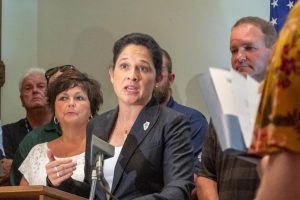 Comptroller Susana Mendoza, shown here during an Aug. 13, 2019, news conference in her office in Springfield, said this week there would be would be “zero” raises for lawmakers despite claims to the contrary. (Capitol News Illinois photo by Jerry Nowicki)

SPRINGFIELD – The complexities of Illinois’ legislator pay laws were on display again this week as the state’s comptroller insisted in a video message that there will be no raises for lawmakers this year.

Comptroller Susana Mendoza, a Democrat and the state’s chief fiscal officer, emphatically said in a one-minute YouTube video there would be “zero” raises for lawmakers despite claims to the contrary.

“By law, there is a (cost of living adjustment) in the budget every year,” Mendoza said in the video. “But this year, the General Assembly voted to make the COLA zero, and I’m glad because it’s the right thing to do, especially in the COVID-19 crisis that has really hit our state budget hard.”

Mendoza should know, she said in the video, because she writes the checks in Illinois, and money not appropriated by the General Assembly cannot be spent. Sen. Andy Manar, D-Bunker Hill, said the same on the Senate floor, noting lawmakers intentionally appropriated zero dollars for raises this year.

Republicans, however, issued news releases and spoke on the floor May 23 claiming the budget included the automatic raises. The state GOP asserted on Twitter that one lawsuit from a “safe, entrenched legislator” could force the payment of the raises which the comptroller has unequivocally denied she will pay.

While Mendoza made clear there will be no raises this year, the exchanges highlighted the fact that an ongoing legal challenge leaves much uncertain in terms of whether legislators can halt their own pay raises legally.

At the crux of the issue is a section in the state Constitution and an Illinois law dating back to 1990 which provides for automatic COLA increases of roughly 2 percent to 3 percent every year unless lawmakers act to stop them. In fiscal Year 2009 and thereafter, lawmakers routinely did just that by including language in a budget implementation bill prohibiting the COLAs.

Lawmakers did not include that language in a budget approved last May, which allowed for a roughly 2.4 percent raise to lawmaker base pay for the first time since 2008, bringing it to $69,464 annually, not including stipends for legislative leaders and committee chairs and spokespersons.

This year, according to Mendoza and Manar, lawmakers went back to denying themselves a raise by specifically appropriating no money to pay for it. That approach is different than in years past, when lawmakers passed language prohibiting cost of living adjustments. The new approach was in large part a response to an ongoing lawsuit which deemed the previous method unconstitutional. 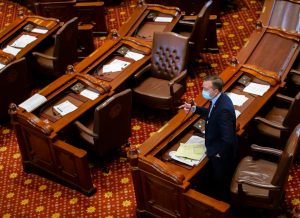 Sen. Andy Manar, D-Bunker Hill, delivers his remarks during debate on the Senate floor at the Illinois State Capitol on May 22 in Springfield. (Pool photo by Justin L. Fowler/State Journal-Register)

“We wanted to say in a very clear voice that we do not want the COLAs funded,” Manar said in a phone call on Thursday, May 28. “There’s multiple places in a state budget where a COLA could be funded. And we took care of all of those things. And the final piece of that was putting a zero next to it, which is, I think, crystal clear what its intention is.”

The lawsuit in question was filed against Mendoza by former Senators James Clayborne and Michael Noland, both Democrats, who claim it was unconstitutional for lawmakers to deny themselves pay in each of those years because the state’s Constitution states “A member shall receive a salary and allowances as provided by law, but changes in the salary of a member shall not take effect during the term for which he has been elected.”

According to a 2019 “Preface to Lawmaking” publication of the state’s Legislative Research Unit, legislator pay was set by law until 1984, when the Compensation Review Act was enacted providing that a Compensation Review Board would make salary recommendations that would take effect automatically unless both houses of the General Assembly disapproved of them within 30 days.

The Board’s 1990 recommendation provided for salaries to be adjusted for inflation each year thereafter, using the federal government’s Employment Cost Index. While the Compensation Review Board was abolished in 2009, it was established that the 1990 plan — including automatic COLAs — would continue to be law going forward.

But because the COLA freezes since 2009 took place mid-term for most lawmakers, they violate the Constitution, according to Noland and Clayborne, and the former lawmakers claim they are due back pay for the raises they were denied.

“Contrary to statements that have been made in the press, the comptroller can — and in fact is obligated to — make these payments regardless of whether the General Assembly has specifically appropriated money for this purpose,” Michael Scotti III, the attorney for the former lawmakers, wrote in a letter to the comptroller last year.

A Cook County judge ruled in their favor last year, but the state has appealed the decision and neither lawmaker has received back pay. That case is likely to be appealed and challenged for years to come, according to the comptroller’s office.

“I’m not going to predict what a court says,” Manar said on May 28. “… But we’re not going to cede our authority as appropriators to an unnamed judge in a case that hasn’t even been filed.”

After last year’s raise went through, one first-term Republican senator filed a bill which he believes will abolish automatic COLAs without running afoul of the constitution.

Sen. Craig Wilcox, R-McHenry, said the latest exchange on lawmaker pay cause a rush of bipartisan support for a bill he has had sitting in the Senate’s Assignments Committee since February. His Senate Bill 3607 would end cost of living adjustments starting in 2023 —the year after each of the state’s lawmakers is scheduled to stand for reelection.

The date is important, he said, because it will be an action implemented after all lawmakers start a new term. Wilcox said he pursued the matter rather than taking part in the politicization of the COLA conversation.

“The point is this kind of negates the reason for Dems and Republicans fighting about words,” he said in a phone call May 28. “It fixes the issue constitutionally going forward.”

Sen. Suzy Glowiak Hilton, D-Western Springs, is a co-sponsor on that measure. She said she was given assurances by budgeteers that there would be no raises in the budget, which is why she supported it. She also said she hoped Wilcox’s measure or something like it would pass when lawmakers return for fall veto session in November or later.

“Our budgeteers were very clear on that,” she said. “And that’s why they didn’t appropriate anything to the raises on the line item.”