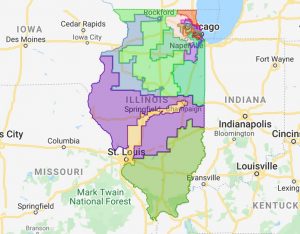 : Democrats introduced the final congressional map that passed the General Assembly after 7 p.m. Thursday, Oct. 28 and then giving it final approval in the early hours of Friday, Oct. 29.

SPRINGFIELD – Illinois lawmakers gave final approval in the early hours of Friday, Oct. 29 to a new congressional redistricting plan that divides the state into 17 districts, one fewer than it currently has due to its loss of population since the 2010 U.S. Census.

It was the fourth draft plan that legislative Democrats had proposed over the previous two weeks, and it was introduced to the public after 7 p.m.

Like earlier versions, it collapses two southern Illinois districts into a single district while carving up much of downstate Illinois into a number of oddly-shaped districts that put cities as far apart as East St. Louis and Champaign into one district, with Bloomington and Rockford linked in another.

“This will be the most gerrymandered map in the country,” Sen. Don DeWitte, R-St. Charles, said during floor debate. “And this process will be used as the poster child for why politicians should never be allowed to draw their own maps.”

But Senate President Don Harmon, D-Oak Park, who carried the bill on the floor of the Senate, defended the maps, saying, “I’m here to stand behind the work we’ve done.”

Most of the legislative wrangling over the past two weeks, however, centered on Chicago and the collar counties, and pressure from within the Democratic caucus to create a second largely-Latino district because of the rapid population growth within that community over the past 10 years.

Illinois’ congressional delegation is currently divided 13-5 in favor of Democrats. Independent analysts, including the nonpartisan Princeton Gerrymandering Project, have estimated that earlier iterations of the plan would give Democrats as many as 14 seats, and Republicans as few as three.

If that holds true, it could have national implications because Democratic congressional leaders are looking to states like Illinois and New York to help offset losses they expect to take in states where Republicans control the redistricting process.

Rep. Kelly Cassidy, D-Chicago, did not vote on the remap proposal. The lone Democratic “no” vote came from Rep. Angelica Guerrero-Cuellar, who was appointed to the 22nd state legislative district in Chicago to replace former House Speaker Michael Madigan, who resigned earlier this year.

Guerrero-Cuellar said on the floor that she remained upset about how the 22nd District was reshaped during the legislative redistricting process in August.

“And there was something done to that district intentionally to exclude Latinos and that representation,” she said. “So when someone tells me, ‘Hey, we’re here to represent the Latinos on the southwest side,’ I’m gonna say, hold on. That was not the case.”

The maps passed after a long day of legislative action during which it appeared rifts in the supermajority Democratic caucus might derail the proposal.

“I don’t know yet,” she responded when asked if she thought the maps would have the votes to pass that day.

The maps needed three-fifths majorities to pass due to a clause in the Illinois Constitution that states any bill passed after May 31 cannot take effect until June 1 of the following year if it does not reach that threshold.

Democrats account for more than the 71 votes needed in the 118-member House, and 36 needed in the 59-member Senate, but bringing them all together proved an elusive task for much of the day.

The draft of the maps that eventually passed Oct. 28 was largely similar to previous versions, except that it moved 3rd District incumbent Rep. Marie Newman, D-La Grange, into a district with Rep. Jesus “Chuy” Garcia, D-Chicago, into a reshaped 4th District.

Garcia’s current district has been described as the “ear muffs” district, or a C-shaped district, because it stretches from southwest Chicago westward to Westchester and Hillside, then northward along a narrow strip to the Northlake area, then back east along Chicago’s north side.

That district is being reshaped in a way that lops off part of the northern strip and forms a new 3rd District, which would be Illinois’ second Latino influence district. It stretches from the north side of Chicago westward to an area that includes portions of West Chicago and Elgin.

In southern Illinois, which saw the most dramatic population declines since the 2010 census, Republican Reps. Mike Bost, of Murphysboro, and Mary Miller, of Oakland, would be paired together in a new 12th District.

In central Illinois, Republican Reps. Darin LaHood, of Peoria, and Adam Kinzinger, of Channahon, would face each other in a 16th District primary.

Unlike the Oct. 27 map, the latest version left Democratic Rep Sean Casten of Downers Grove uncontested in the 6th District primary. Newman was drawn into that district in the that earlier version, but was moved into Garcia’s district in the Oct.28 map.

Some people who spoke during that hearing expressed disappointment with the latest draft, including residents of what is currently the 3rd District on Chicago’s southwest side.

In 2020, Newman edged out then-incumbent Rep. Daniel Lipinski in the Democratic primary in that district and went on to win the general election. The latest proposal, like both other drafts before it, would put much of that district into a new 6th District.

William Beaulieu and Clare Duggan, both members of a group called Coalition for Change IL3, said that group was formed, in part, to unite the diverse communities and bring about change in the 3rd District.

Members of that coalition have testified at nearly every public hearing about new congressional maps since the hearings began in early August, and Duggan said many of them had submitted their own proposed maps through the Democratic caucuses’ mapmaking web portals.

Despite that, Duggan said, while the latest draft would keep more of the current 3rd District intact than previous iterations, significant parts of the district would be broken off into other districts.

Under questioning from Republican senators, Harmon said the proposal was based on “the totality” of input that legislative leaders received from the public as well as other sources, including private communications with staff from various congressional offices.

“We are not obviously adopting one person’s map and presenting it as our own,” Harmon said. “We are taking input from all sources and it is reflected in the maps presented to the Senate.”