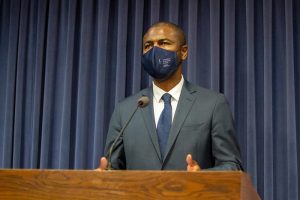 State Rep. La Shawn Ford, D-Chicago, speaks about his bill that would create changes to the marijuana licensing process Thursday, May 20 at the Capitol. (Capitol News Illinois photo by Jerry Nowicki)

SPRINGFIELD – A bill aimed at allowing more people from distressed communities to get into the lucrative recreational marijuana business is on its way to the House floor as lawmakers head into the final days of the spring 2021 session.

“The bill will correct a flawed license lottery system that has prevented minorities from ownership in the industry,” Rep. La Shawn Ford, D-Chicago, the bill’s chief sponsor, said during a news conference Thursday, May 20.

House Bill 1443 is a follow-up to the landmark bill that passed in 2019 legalizing and regulating the sale and use of recreational marijuana. Under that law, dispensaries that were already licensed to sell medical marijuana immediately became eligible to apply for recreational-use licenses while a number of other licenses were set aside for so-called “social equity” applicants.

Those were to be businesses run by people from communities that were disproportionately affected by over-policing and criminal drug prosecutions during what former President Richard Nixon dubbed the “war on drugs,” as well as individuals and family members of people who had previously been prosecuted for marijuana violations.

The first 75 social equity licenses were supposed to go out last year through a lottery system, but that was put on hold when, out of more than 900 applications filed, only 21 received perfect scores making them eligible to enter the lottery.

Since then, the Illinois Department of Financial and Professional Regulation has given those who didn’t make the cut a chance to amend their applications, and it plans to go through a second scoring process before determining which ones will qualify for the lottery.

Ford’s proposal, meanwhile, calls for establishing two more lotteries in which a total of 110 dispensary licenses will be available.

One of those would be for applicants who received a score of 85 percent or better on their initial application and did not receive a license in the initial lottery; the other would be specifically for applicants with similar scores who have personally been convicted of a marijuana offense or has a family member with such a conviction.

Former state Sen. Toi Hutchinson, who now serves as Gov. J.B. Pritzker’s cannabis policy advisor, said during a House Executive Committee hearing Thursday that lowering the “cut score” for applicants to get into the other lotteries would open the way for about 65 percent of the applicant pool to have a chance for a license.

Ford acknowledged that even with the additional lotteries, some applicants still will not get a license, but he said it was important to give more people from disproportionately impacted communities an opportunity to get into the new industry.

“When this all started with working with the social equity applicants, all they asked for is a chance, and that’s what they’re asking for now,” Ford said during a committee hearing May 20. “They understand that this is a lottery, and this is a gamble. … But they really just want an opportunity to get what they paid for. And that’s what we’re trying to do right now.”

The bill passed out of the House Executive Committee by a vote of 15-0. It now heads to the full House for consideration.