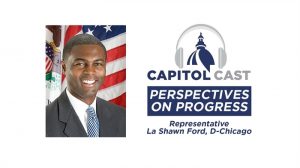 Capitol News Illinois has launched its new “Perspectives on Progress” podcast series  to broadcast conversations about race in America and Illinois.
To begin the series, the Statehouse news bureau reached out to the 31 members of the Illinois Legislative Black Caucus to hear their perspectives and share their experiences with racism and their thoughts on what actions, legislatively or otherwise, are needed to move forward.
The state’s black leaders shared the emotions evoked when they saw the video of the killing of George Floyd, an unarmed Minneapolis man who died after a police officer knelt on his neck for nearly nine minutes on May 25.
The first guest on Perspectives on Progress, Rep. La Shawn Ford, D-Chicago, shared his thoughts on the feeling of helplessness that is often manifest when videos of police violence against black men surface.
“You know, the pain and the trauma that that triggers, people often say to us, why do you guys always talk about reparations, why do you talk about, you know that black people, but every time that happens, we’re reminded of the whippings we got from the slave masters when we were enslaved and we couldn’t do anything about it. We’re reminded of Emmett Till, kid couldn’t do anything about it. We’re reminded of Trayvon Martin. We’re reminded of Laquan McDonald. It all continues to come back at us. And we’re almost in positions of no control, so this is trauma for us. … It is relived at a magnitude that is escalated constantly.”

Ford has been calling on Gov. J.B. Pritzker to sign an executive order to “immediately respond to” the “crisis” in the black community.
He said the disproportionate death rate of black Illinoisans during the COVID-19 pandemic was only the most recent manifestation of how prolonged state and local government disinvestment in black communities can have wide-ranging negative effects.
“I think we really need to recognize that the state has an emergency and we must deal with it, and that is the conditions of blacks,” he said.
Ford also touched on the media’s role in covering race in America, his response to critiques of the protest movement and his own personal struggles.
The Perspectives on Progress series will continue periodically with several other discussions with the state’s black leaders and others as the series evolves.
The Perspectives on Progress project is a special series of the CapitolCast podcast, which can be found on Capitolnewsillinois.com. It’s also available for download on several podcast platforms, including the Capitol News Illinois iTunes channel, Soundcloud and Spotify.