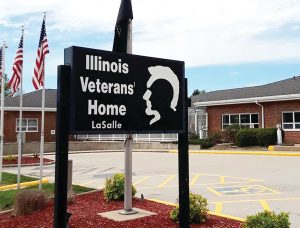 Deputy Gov. Sol Flores and Illinois Department of Public Health Director Ngozi Ezike said they were unaware of the breakdown in basic infection control protocols at LaSalle Veterans’ Home that led to a November COVID-19 outbreak that killed 36 veterans.

SPRINGFIELD — Top officials from Gov. J.B. Pritzker’s administration claimed Thursday, May 13 that they were misled by leadership at the state Department of Veterans’ Affairs regarding a deadly COVID-19 outbreak at the state-run LaSalle Veterans’ Home.

Deputy Gov. Sol Flores and Illinois Department of Public Health Director Ngozi Ezike said, as a result of this misinformation, they were unaware of the breakdown in basic infection control protocols at LaSalle that led to a November COVID-19 outbreak that killed 36 veterans.

During the nearly four-hour House Veterans’ Affairs Committee hearing May 13, Flores blamed senior officials at IDVA and the home for the staff’s failure to follow state and federal health guidelines.

“IDVA was supposed to be following all protocols laid out in the IDPH and (U.S. Centers for Disease Control and Prevention) guidelines specific to long-term care facilities,” Flores, who oversees human services agencies for the governor’s office, told the committee. “We were told that that was happening by the home administrator (Angela Mehlbrech), and the staff that was on the ground.”

Mehlbrech was fired in December, and former IDVA Director Linda Chapa LaVia, as well as her chief of staff, Tony Kolbeck, have since resigned.

“Now that visitation is allowed, I intend to go with (IDVA Acting) Director (Terry) Prince and visit more of the homes,” Flores said, noting she has not yet visited the LaSalle home in person.

Ezike said medical and infection control professionals at IDPH were in frequent contact with the Kolbeck and others at the home throughout the outbreak to educate and recommend strategies.

“Through these calls and through the information we were hearing at the time, we believed that the home was following all the recommended protocols and the appropriate steps were being taken to address the cases,” Ezike said.

The hearing comes two weeks after the release of an investigative report into the response by officials from the home and IDVA.

The investigation revealed a response to the outbreak at the LaSalle home that was “inefficient, reactive, and, at times, chaotic,” according to the 50-page report from the Illinois Department of Human Services’ Office of the Inspector General. 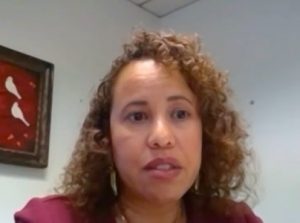 Deputy Gov. Sol Flores, who oversees human services agencies for the Pritzker administration, testifies Thursday, May 13 before the House Veterans’ Affairs Committee regarding the deadly outbreak at the LaSalle Veterans’ Home. (Blueroomstream.com)

It described former IDVA Director Linda Chapa LaVia as having “abdicated” her authority to Kolbeck. It also found that no one at IDVA visited the LaSalle facility, either in person or virtually, from March 2020 until December 2020.

The scope of the investigation was limited to examining policies and protocols in the home, as well as assessing IDVA’s response to the outbreak and compliance with state and federal regulations.

The investigators only requested documents from IDVA, but not from the governor’s office or IDPH, according to Peter Neumer, acting inspector general at the Illinois Department of Human Services.

Neumer testified before the same committee earlier this week, noting his team did not interview anyone with the governor’s office, although it did interview three IDPH officials who have medical experience or backgrounds in infectious disease.

The inspector general’s report found that IDVA failed to implement recommendations made in 2019 after an outbreak of Legionnaires’ disease at the state-run veterans home at Quincy that killed 13 veterans. Those recommendations called on IDVA to create uniform infection control policies across all four state-run homes.

Acting IDVA Director Prince, who also testified at the May 13 committee hearing, said uniform policies were implemented at all four state-run veterans homes in late April.

The senior home administrator position at LaSalle, which has remained vacant since 2019, would have been responsible for carrying out these recommendations, according to the report. Since the position had not been filled, the recommendations were not implemented by the time the pandemic hit.

Prince said this position is still vacant but his department is currently interviewing candidates.

Pritzker, at an unrelated news conference on May 12, also assigned blame to IDVA leadership when asked about the failure to carry out recommendations.

“I’m upset and extraordinarily disappointed that leadership at the Department of Veterans’ Affairs did not make the corrections suggested in that report that should have been made,” he said.

House Minority Leader Jim Durkin of Western Springs sent a formal request on Tuesday, May 11 to Attorney General Kwame Raoul asking him to open a criminal investigation into the COVID-19-related deaths at the LaSalle home.

“Caring for our aged veterans in our state facilities should always rise to the highest level of care,” Durkin’s wrote in the letter. “That standard of care for our heroic veterans at the LaSalle Veterans’ Home was not met as evidenced by the report.”

Such an investigation would not be unprecedented.

In 2018, then-Attorney General Lisa Madigan, a Democrat, launched a criminal investigation into how the administration of then-Gov. Bruce Rauner, a Republican, responded to the deadly outbreak of Legionnaires’ disease at Quincy between 2015 and 2018.

That investigation concluded in 2020, under current Attorney General Kwame Raoul, also a Democrat, who found there was not a basis to bring charges.

A spokesperson for Raoul’s office said Durkin’s request is being reviewed.

The state is also facing more than a dozen lawsuits filed on behalf of veterans who contracted COVID-19 at LaSalle. The lawsuits accuse the facility of providing negligent health care that violated state law.

Lawyers with the Chicago-based Levin & Perconti firm have argued in the lawsuits that the LaSalle facility did not provide health care services consistent with guidance issued by the state and federal health authorities, did not adequately supply or properly use personal protective equipment, and did not take the necessary steps to provide medical care to patients with COVID-19 or prevent further transmission of the virus.