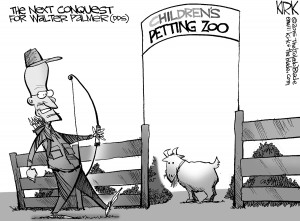 “Until the lion tells his side of the story, the tale of the hunt will always glorify the hunter.”

On the ledger of global outrages, the killing of Cecil the lion outside of a Zimbabwe national park should barely register.

And yet the animal’s shooting by a Minnesota dentist, Walter Palmer, has evoked a fierce reaction. Some of it is hysterical and insipid. Palmer shouldn’t be personally ruined, let alone brought up on war-crimes charges, as some seem to suggest. The outpouring over this particular cat is, in part, based on the childish anthropomorphism of his having a name, Cecil, after Cecil Rhodes, the British imperialist and founder of Rhodesia, subsequently Zimbabwe.

Nonetheless, at the core of the outrage is a natural and healthy revulsion at the wanton destruction of an animal of great majesty. The regal self-possession of the lion stands in stark contrast to the tawdriness of Walter Palmer’s hunt.

There was the money-grubbing — he reportedly paid about $50,000 for the privilege of killing one of the beasts. There was the unseemly baiting of the animal to lure it out of the sanctuary of Hwange National Park. There was the cruel incompetence of his method — supposedly wounding it with a bow, then tracking the creature for another 40 hours before completing the kill with a gun. And there was the casual butchery after the fact — beheading the cat and leaving its carcass to vultures and other scavengers.

When it emerged that the lion he had killed was Cecil, a popular fixture long tracked by researchers, Palmer issued a statement saying he had no idea that the lion he “took” (although he won’t be giving it back) was a local favorite. As if it would be OK to wound and hunt down over two days some pitifully unpopular and anonymous lion.

Trophy hunters like Palmer have a passion for killing polar bears and the like. There is no accounting for taste, but surely there are other engrossing hobbies that don’t involve shooting the planet’s most stunning creatures.

Anti-poaching laws, which might have been broken in this case, should be as tightly enforced as possible, and the act of killing a glorious beast for a photo with his carcass and a stuffed head on the wall back home should be considered the shameful waste that it is.

None of this is to say that lions in particular should be sentimentalized. They are man-eaters whose social life is Hobbesian in the extreme. They also are a wonder of nature whose numbers are dwindling. We can disagree about the exact parameters of our obligations to the animal kingdom, but surely going out of our way to slay a creature like Cecil the lion should be out of bounds.