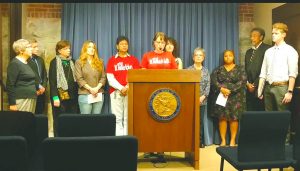 SPRINGFIELD — Opponents of legislation that would create tougher penalties for intentional damage to critical infrastructure say the bill would actually infringe on an individual’s right to protest at those facilities and against the companies that operate them.

Representatives of more than 50 groups statewide said during a news conference May 14 morning at the Capitol that House Bill 1633 provides protections to “big industry” that could harm the environment and intimidate potential protesters.

The bill, approved by the House last month, would cover intentional damage to equipment in a critical infrastructure facility. Those facilities would include oil pipelines, nuclear power plants, pumping stations, gas processing plants, military bases, more than 9,900 miles of railroad tracks in Illinois and other facilities.

“We’re here to urge state senators and Gov.[ J.B.]Pritzker to stand up against this bill and look at it for what it is,” said Kylah Johnston, a spokesperson with The People’s Lobby. “An attempt by conservatives and fossil fuel industry to … raise new charges against black and brown communities that are already disproportionately affected by pollution and criminal justice.”

Elizabeth Kosuth, a leader with Illinois People’s Action, said the bill should be called the “protect big energy from the people bill,” and that it’s nothing more than an attempt by energy industries and their ally, American Legislative Exchange Council, to deter people from protesting against the industries and their impacts on the environment.

“A healthy environment won’t just happen because we wish it,” Kosuth said. “As with all social movements, we must push, organize, and yes, even protest.”

Mark Denzler, president and CEO of the Illinois Manufacturers’ Association, said the bill isn’t an attempt to stifle the voices of anyone who wants to protest.

Denzler said a claim made during the news conference that the bill could be used to prosecute someone who spray paints a utility pole is false, and that the words “defacing” and “vandalism” were removed from the bill in the negotiation process.

But Cary Shepherd, policy director of the Illinois Environmental Council, said the language of the bill is misleading and broad.

He said it gives the impression it would apply only to larger facilities, like nuclear power plants, when it could also be applied to prosecute anyone who defaces or causes “minor damage to an abandoned rail yard.”

Plus, he added, the bill is unnecessary because there are federal and state laws that cover damage to critical infrastructure facilities as well as trespassing.

“So this is nothing but an increase in sentencing,” Shepherd said.

Under the bill, criminal damage to a critical infrastructure facility would constitute a Class 3 felony and would be punishable by imprisonment, a $100,000 fine or both.

The bill was scheduled to be heard in a Senate committee Tuesday, but the meeting was canceled.