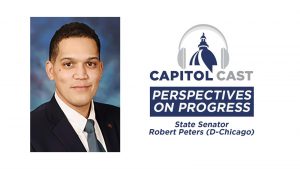 SPRINGFIELD – For state Sen. Robert Peters, ongoing protests sparked by the death of George Floyd are bigger than a single event of police violence, and it will take a collective effort to pave a path forward.

Peters, a Chicago Democrat, shared his thoughts for the Capitol News Illinois “Perspectives on Progress” series, which is a collection of conversations on race in Illinois and the U.S.

“Those protests are about police violence but I think they go much broader than that,” he said. “If you’re 18 or 30, you remember the war in Iraq and the fact that the entire war was built on a lie. You remember the Great Recession and how a few billionaires got bailed out, everyone got sold out or pushed down. You remember the murders of Trayvon Martin, Laquan McDonald, Rekia Boyd.”

McDonald was shot 16 times by a Chicago Police Department officer in 2014, and Boyd was killed by an off-duty CPD officer in 2012. McDonald’s killer was convicted of second degree murder after a video was made public more than a year after the killing, while the officer who shot Boyd was acquitted of a manslaughter charge by a judge. Martin was shot and killed in Florida in 2012 by a neighborhood watch coordinator who was acquitted of murder charges.

Peters said thoughts of those cases and others are stirred when videos like that of the killing of George Floyd surface. Floyd, an unarmed black man, died in police custody on May 25 as a white police officer knelt on his neck for nearly nine minutes. The case set off protests and unrest across the nation, sometimes leading to looting and property destruction.

Peters said reforms in criminal justice and police accountability are needed to “focus on reimagining what safety and justice in our communities look like.” Lawmakers should address growing wealth disparities as well, he said.

“I don’t think it’s just on the governor,” he said. “I think it is on each and every one of us in this state. I think that’s an important emphasis. When it comes to our government, we can’t look to one individual to be the savior of what we need. I think too much is asked of a politician to be a savior when each and every one of us, both as electeds and as communities, must organize as saviors for our communities together.”

In terms of media coverage, Peters said the focus has become too much on looters and less on the suffering behind protests. He said while some who participate in looting “just do it to create chaos,” for many, “it’s because they live in chaos.”

“The story of what’s going on right now isn’t the story of looting. I think that story is exciting. That story is what so many movies are made out of. It feeds to a particular readership or viewer that skews a bit older. And it helps sell on reaction. It is time for us to tell the stories of the pain and the suffering in the communities,” he said. “If we don’t tell that story about police violence, or the economic crisis, or the health care disparities, and the decade or two decades long of pain, and we don’t deal with it, then we’re not going to get to the root of what’s going on in society right now.”

Peters said he would like to see the momentum of the moment turned into lasting change.

He said the fact that protests spread to largely white and wealthy areas in the state such as suburban Naperville shows that there is momentum for change.

“It just goes to show that we’re in a, you know, a changing time,” he said “And, I think that is something that is, out of this crisis, an opportunity to build on.”

Capitol News Illinois’ Perspectives on Progress series has thus far included the voices of black legislators in Illinois, including their views on unrest in the U.S. and how they believe Illinois can move forward. Episodes can be found at capitolnewsillinois.com.