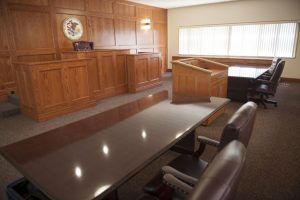 The principles outlined by Gov. J.B. Pritzker and Lt. Gov. Juliana Stratton themselves are policy positions that have been championed by the Illinois Legislative Black Caucus as part of the caucus’ legislative agenda for the upcoming veto session. (Photo courtesy of the Illinois Bar Assoc.)

SPRINGFIELD — Gov. J.B. Pritzker announced seven “guiding principles” on Tuesday, Oct. 6 to “build a more equitable criminal justice system,” a series of policy recommendations the governor says are priorities for his administration as it works with the General Assembly.

The seven principles build on the justice reform agenda that was laid out by Pritzker and Lt. Gov. Juliana Stratton in January as part of the unveiling of the Justice, Equity and Opportunity initiative that operates out of the lieutenant governor’s office.

“As I’ve always said, we cannot truly have justice without equity and opportunity. These principles will guide us on a path of repairing the historic harm caused by our justice system, especially in Black and Brown communities,” Stratton said in a news release. “Comprehensive justice reform will help to reverse the systemic cycles that tear apart families, lay barren communities, lead to overcrowded jails, put strains on criminal justice infrastructure, and burden taxpayers.”

The principles themselves are policy positions that have been championed by the Illinois Legislative Black Caucus, both in years past and as part of the caucus’ legislative agenda for the upcoming veto session. Many of the principles have been the subject of joint senate committee hearings held in the past few months, spurred by the ILBC agenda.

“The governor commends the decades of tireless work by the Illinois Legislative Black Caucus,” according to an Oct. 6 news release from the Pritzker’s office.

The first principle includes an end to cash bail and limits to pre-trial detention, allowing it only for individuals who are a threat to public safety. The governor calls for cash bail to be replaced by a “risk assessment” system to determine whether a defendant is likely to appear at trial and whether they pose a threat to others if released.

The second principle calls for the reformation of sentencing laws on theft and drug offenses, and taking a public health approach in dealing with issues of mental health and drug addiction – conditions prevalent among segments of the incarcerated population which are currently dealt with primarily by criminal justice institutions.

Third, the governor seeks to reduce the length of time spent by offenders in prison and offer more opportunities for rehabilitation. According to the release, the state would increase access to credit for time-served and time-limited supervised release. Currently, truth in sentencing laws require convicted offenders to serve the vast majority of their sentence regardless of good behavior.

The fourth principle seeks to prioritize rehabilitation over punishment and reduce the risk of recidivism— the process of released individuals committing new crimes and returning to the prison system not long after completing their original sentence — by increasing services for incarcerated individuals to help them secure housing and health care upon release.

The fifth principle calls for an increase in accountability and transparency for police departments. According to the release, the governor advocates for the licensing of police officers, body-camera requirements, state-level processes for investigating police misconduct and making it easier for civilians to report officer misconduct by removing barriers.

One such barrier is the signed affidavit requirement, passed in 2004 after lobbying from police unions, which requires all police complaints be accompanied by a sworn affidavit, something police reform advocates say can intimidate people from filing legitimate complaints.

The sixth calls for establishment of statewide standards for use of force by police officers, including a requirement to issue first aid after using force and a prohibition of no-knock search warrants. The governor’s office also calls for mandates that officers must intervene and make a report when excessive force is used by another officer or subject themselves to liability.

The seventh seeks to decrease negative interactions between law enforcement and civilians by decriminalizing minor non-violent offenses and providing more resources to train officers on how to respond to non-violent crimes and protests.

The governor’s office said principles can be achieved through a mix of executive authority and reforms to departments under Pritzker’s control, such as ongoing reforms at the Department of Juvenile Justice, and legislation from the General Assembly. Many of the principles are set to be addressed via legislation by the ILBC during the veto session scheduled for Nov. 17-19 and Dec. 1-3, although criminal justice accounts for just one pillar of the Black Caucus’s four-pronged agenda to end systemic racism in Illinois.

In Tuesday’s announcement the governor said he is committed to “working with the caucus on the additional pillars of their agenda,” which includes education, economic equity and health care.

“We’re building toward an Illinois that works for everyone – and criminal justice reform is a key element of that holistic approach,” Pritzker said. “As we move forward with the General Assembly to pass comprehensive criminal justice reform, it is my hope that the nation will look to Illinois as a leader in true equity and justice for generations to come.”