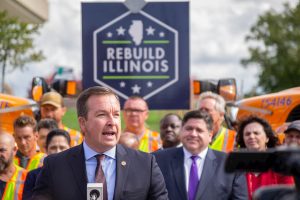 State Sen. Andy Manar (D-Bunker Hill) said during the Oct. 21 news conference in Springfield that Rebuild Illinois will benefit people in all parts of the state. “Ultimately, beyond just repairing roads and fixing bridges that are in desperate need of repair, this bill … is going to put thousands of people, thousands of people to work in all parts of Illinois,” Manar said. (Photo by Jerry Nowicki/Capitol News Illinois)

SPRINGFIELD — Lawmakers and Illinois Department of Transportation officials released details of a new $23.5 billion multi-year plan for revamping the state’s roads and bridges Oct. 21 at a bipartisan event in Springfield.

Democratic Gov. J.B. Pritzker stood in front of two orange work trucks and a fleet of yellow-vested construction workers as he and speakers from both parties hailed the plan as one that would stimulate the state’s economy and usher in a new era of bipartisanship and effective government in Illinois.

Acting IDOT Secretary Omer Osman, a Pritzker appointee, said slightly more than $9 billion of the $23.5 billion that will be spent from fiscal years 2020-25 will come from the federal government, about 39 percent of the total funding. He said the passage of the horizontal infrastructure bill this May upped the state’s contribution to the multi-year plan from 12 percent to 58 percent.

The money will go toward maintaining 4,212 miles of roadways and 9.2 million square feet of bridges, according to the governor’s office. The projects on the list were identified “based on the principles of asset management” to “maximize system performance and minimize lifecycle costs.”

Factors that help determine which projects will be completed and the order of construction include crash history, pavement condition, average daily traffic and bridge condition.

“This is a big change from how previous capital programs have done this in the past when the state would let roads and bridges deteriorate so thoroughly that repairs have cost taxpayers far more than if they’d been maintained to a minimum standard,” Pritzker said. “Instead, we are embarking on a new regimen of investing on the front end. This is a historic improvement which will save taxpayers potentially billions of dollars over the long run.”

According to the governor’s office, 75 percent of the funds is allocated to reconstructing and preserving roadways and bridges, while 16 percent is dedicated “to strategically expanding the system in areas where data have shown the investment will be highly effective.” The rest will go to “necessary traffic and safety improvements.” 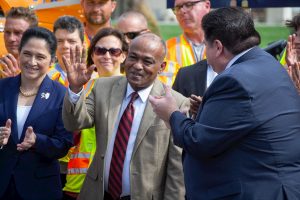 Omer Osman, acting secretary of the Illinois Department of Transportation, said passage of the infrastructure bill earlier this year allowed the state’s contribution toward the $23.5 billion program to increase from 12 percent to 58 percent. He spoke during a news conference Oct. 21 in Springfield. The roads and bridges are primarily funded by an increase of the state’s gas tax to 38 cents per gallon from 19 cents, with the tax indexed for inflation going forward. (Photo by Jerry Nowicki/Capitol News Illinois)

In total, $7.58 billion will go toward roadway reconstruction and preservation, $4.99 billion to bridge replacements and repairs, $1.59 billion to “safety and system modernizations,” $3.08 billion to strategic expansion of the system and $2.11 billion for system support such as engineering and land acquisition, according to the governor’s office.

Pervasive during the news conference were questions about the ethics of the project selection process, given the ongoing probe of one of the capital bill’s chief architects, Sen. Martin Sandoval, and a growing list of other government officials.

In his public remarks, Pritzker said the state would follow “a rigorous and objective procurement process with the highest standards of transparency and ethics,” and “taxpayers need to know that their resources are being used wisely and effectively.”

“Let me be clear about something. There is no, no acceptance in any way whatsoever — in fact, a full-throated rejection by my administration, by this IDOT — of any of the deception of the corruption that has been uncovered and that may yet be uncovered,” Pritzker said when asked about the ongoing federal probe. “We are being extremely focused and careful to make sure that every dollar that gets spent in this capital plan is done completely above board and done the right way and with taxpayers in mind.”

There have been no official charges of wrongdoing resulting from several high-profile raids on elected officials in recent weeks. But Sandoval, a Chicago Democrat who carried the horizontal infrastructure bill in the Senate and hosted a series of committee hearings across the state to build support for it, resigned as chairman of the Senate Transportation Committee following raids on his Statehouse and district offices in September. 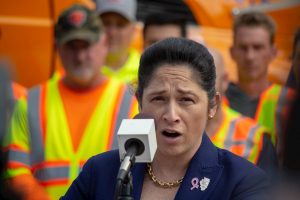 Comptroller Susana Mendoza speaks during the Oct. 21 announcement of road and bridge projects across the state as part of the Rebuild Illinois capital plan. The projects were announced during a news conference in Springfield. (Capitol News Illinois photo by Jerry Nowicki)

Sandoval has not appeared publicly since those raids occurred, and he was not at the news conference Monday. But Sens. Andy Manar (D-Bunker Hill) and Don DeWitte (R-St. Charles), who traveled the state with Sandoval’s committee, each praised the bill and the processes in place to determine how the money will be spent.

“Ultimately, beyond just repairing roads and fixing bridges that are in desperate need of repair, this bill … is going to put thousands of people, thousands of people to work in all parts of Illinois,” Manar said. “That helps out every part of our state’s economy, and this is a sustainable program that’s going to be paying dividends to the people of the state for years to come.”

DeWitte said he “couldn’t be prouder to be a part of this new era that we have begun for the state of Illinois” as he praised the bipartisan effort.

“Instead of continuing the status quo, leaders from both sides of the aisle and Governor Pritzker and his staff came forward with real solutions to the challenges that face communities all over the state of Illinois,” DeWitte said. “This capital plan is going to do exactly what its name promises to do, it will rebuild Illinois.”

The road and bridge infrastructure spending is separate from building infrastructure money which will be generated by a massive gambling expansion in the state. The roads and bridges are primarily funded by an increase of the state’s gas tax to 38 cents per gallon from 19 cents, with the tax indexed for inflation going forward.

A full list of road and bridge projects can be found here.