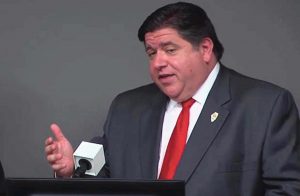 Gov. J.B. Pritzker announces that about 200 members of the Illinois National Guard will assist with flood and levy monitoring along the Illinois and Mississippi rivers. The governor made the announcement during a news conference May 30 in Springfield. (BlueRoomStream.com)

SPRINGFIELD — Gov. J.B. Pritzker’s office is urging Illinoisans to report any damages caused by recent flooding to their county’s emergency management agencies in order to increase the likelihood of the state qualifying for federal aid.

A release from Pritzker’s office said Illinois can qualify for federal assistance if the total flood damage in the state meets or exceeds $19 million.

A formal request to the federal government must be submitted by Aug. 3, which is 30 days after the last impacted river fell below major flood stage, the governor’s office said. Once the state completes the report, the Federal Emergency Management Agency makes a recommendation to the president, who has the final say as to whether relief can be granted.

“While the ultimate decision on our state receiving federal funds lies with Washington, my administration is committed to doing everything in our power to ensure our communities get all resources available to recover,” Pritzker, a Democrat, said in a news release. “Our state has not received a federal disaster declaration since 2013 and there is no doubt this will be an uphill battle.”

Emergency managers in each impacted county are assessing damage, including residential, commercial and governmental expenses. The county agencies will then report that information to the state by the close of business July 22 via the Illinois Emergency Management Agency. Some flexibility will be given for counties where floodwaters are still blocking access to homes or roads.

The state established a website for flood communications and resources which can be found at www.Illinois.gov/2019Floods.

The site contains a module which allows residents and business owners to submit an initial damage report online. The website then forwards the submission to the appropriate county emergency management agency for follow-up reporting.

Acting IEMA Director Alicia Tate-Nadeau said any damage, “regardless of whether it is $200 or $20,000,” should be reported to county agencies.

“Previous agency experience has demonstrated the importance of being as thorough as possible during this initial damage assessment,” she said in a statement. “Any kind of flood-related damage should be reported to your county emergency management office. … Without a complete picture of the damage caused by this flood, Illinois could miss out on invaluable federal funds that can help our state rebuild following this extensive disaster.”

There have been 36 Illinois counties covered by gubernatorial disaster declaration in 2019, and Pritzker’s office said the state’s emergency operations center in Springfield was activated for more than 150 days throughout the flooding cycle.

The governor’s office said the state and its partners have deployed more than 5 million sandbags, 38,000 tons of rock, 3,000 rolls of plastic, 450 feet of flood control barriers and 1,750 feet of water control dams.

It also deployed more than 400 Illinois National Guardsmen and 97 pumps in affected areas, and distributed more than 14,000 emergency supplies.