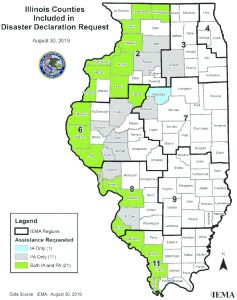 That number is more than triple the $19.2 million — or $1.50 per Illinois resident — in damages necessary to qualify the state for aid through the federal government’s Robert T. Stafford Act which governs disaster relief through the Federal Emergency Management Agency.

“For more than 150 consecutive days, historic and unprecedented spring floods and severe storms plagued communities across our state, and first responders did an incredible job protecting life and property,” Pritzker said in the release. “However, seven families experienced the ultimate tragedy when their loved ones perished due to this natural disaster. This flood tore children from their homes, severely restricted key transportation lifelines and decimated local economies — and it may take years for some communities to fully recover.”

Individual assistance would provide financial relief and assistance such as housing assistance, medical and mental health services, and legal assistance to residents in eligible counties. It applies to uninsured or under-insured individuals, families, businesses and nonprofits. Those affected would be eligible to apply for grants up to $31,500 and low-interest loans.

Public assistance would provide financial relief to the eligible counties that have “exhausted their available local resources and are seeking reimbursement for the flood-related damages and associated costs incurred from responding to this natural disaster,” according to a release from the Illinois Emergency Management Agency.

For public assistance, state, county and local governments would be eligible to apply for federal reimbursement of up to 75 percent of their “extraordinary” disaster-related expenses, per the Stafford Act. Eligible work includes debris removal, emergency protective measures and the permanent restoration of public facilities, according to IEMA.

The damage in Illinois was catalogued through a joint effort of FEMA, IEMA, the United States Small Business Association and affected communities.

Pritzker’s office said more than 1,000 miles of roadway and bridges were damaged or left inaccessible, many of which are still not opened.

The flooding impacted more than 1,400 homes and 2.1 million people, with 42 homes destroyed, 178 sustaining major damage, 419 with minor damage and 708 impacted by rising floodwaters.

A Small Business Association survey identified 76 businesses and nonprofits with major impacts from this disaster and 217 with minor impacts.

The state’s application was submitted to FEMA, which will make a recommendation to Republican President Donald Trump as to whether disaster should be declared based on several factors, including the cost of assistance and localized impact.  The president has the final say as to whether it will be granted, and there is no deadline as to when a decision is due.

Illinois’ application has the bipartisan backing of its entire congressional delegation, which wrote a letter to Trump supporting the state’s request.