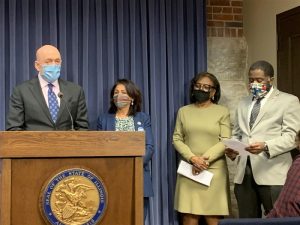 SPRINGFIELD – Citing an “improved” economic outlook, Gov. J.B. Pritzker announced Thursday, May 6 his support to increase evidence-based education funding in the state by $350 million in fiscal year 2022 which begins July 1.

It would have been the second consecutive year in which the state failed to add $350 million to the funding formula — a number written into state statute as a goal aimed at driving new money to the districts that are furthest from funding “adequacy.”

Adequacy is based on a number of factors, including class size and local capacity to fund a school district.

“Parents, students and educators can breathe a sigh of relief,” Pritzker said in an unrelated news conference on May 6. “As an education advocate myself, I am really all too happy that our improved economic and fiscal condition allows us to increase educational funding.”

The announcement comes following the latest report from the Commission on Government Forecasting and Accountability, which cited improved revenue numbers for the current fiscal year as the state works toward a full economic recovery from the pandemic.

Per that report, after revenues fell by $2.74 billion last April, base general fund revenues in April 2021 grew $1.779 billion, in part because April income tax payments were delayed one year ago.

“While the full story of FY 2021 revenues has yet to be written, given the onset of the pandemic, receipts clearly have performed much better than any prognosticator could have foretold one year earlier,” the COGFA report stated.

“Despite periodic upward revisions in the revenue projections throughout the course of the fiscal year, each time those updated expectations have been met and exceeded,” the report continued.

The Illinois State Board of Education, in appropriations hearings in the House and Senate earlier this year, pushed back on the governor’s initial proposal to keep funding flat. Leaders in the General Assembly from both parties have done the same.

ISBE requested a 4.6 percent funding increase for FY 2022, including asking for an added $362.1 million to the evidence-based funding formula and $50 million in added early childhood education grants.

Their request would put their state general revenue funding — which is the state’s main discretionary spending account — at about $9.3 billion.

Pritzker did not give details on the proposed ISBE budget, aside from giving his support to the $350 million in added funding.

Per the budgeting process, both Houses of the General Assembly must approve a spending plan, then Pritzker would have the opportunity to sign or veto it.

House Majority Leader Greg Harris, D-Chicago, in a news conference that occurred in Springfield at the same time Pritzker’s was going on in Chicago, said lawmakers are well into the process of planning a budget for the upcoming fiscal year. He said he was optimistic about the latest COGFA report, but the state’s financial picture is still somewhat bleak.

“Revenue has continued to perform very, very well,” Harris said. “The economy of the state of Illinois has been performing better than we had expected. And to be honest, we initially planned for this year very conservatively, not knowing what COVID would bring.”

“It’s given families some disposable income, that has allowed them to go out and spend, you know, to support their families,” he said. “And that has in turn, raised our income taxes and our sales taxes in the state.”

Lawmakers will have to project whether the rosy revenue projections for the end of this fiscal year will carry on into the next fiscal year.

“We’re seeing some very good numbers in the state,” he said. “That being said, we still are looking at next year, a budget deficit of about $1.4 billion that we’ll have to solve for, and some new revenue could certainly help that. But it’s not going to solve the entire problem.”

One key part of the governor’s proposal to balance the budget is to make several changes to the corporate tax structure — changes he calls closing corporate tax “loopholes,” which Republicans call important business “incentives.”

While Pritzker signed off on a number of those corporate tax cuts or credits in his first year, Harris said budgets are “dynamic things,” and changing revenue pictures mean cutting expenditures.

“But the most important thing is we’ve got to protect the state budget, we’ve got to protect our core functions,” he said. “We’re happy to sit down and negotiate with the Republicans and the Democrats in the Senate, and if it’s a will of folks to keep those in, I think that’s what all of us would be willing to do.”