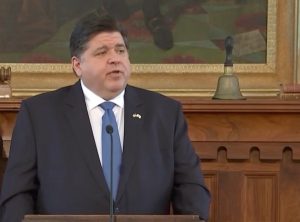 Gov. J.B. Pritzker on Wednesday, Feb. 2 delivered his fourth proposed budget and outlined spending plans for an anticipated $1.7 billion surplus for the fiscal year that will end June 30. (illinois.gov)

SPRINGFIELD – Max Cerda was convicted of a double murder when he was 16 years old.

Cerda received parole in 1998. He was 35 years old when he was released and began working with ex-offenders in Chicago to help them transition to life outside of prison.

In March 2021, Cerda was appointed to the Illinois Prisoner Review Board. He was the first ex-offender to serve on the 15-member board that decides who will be released from prison and under what conditions. Cerda earned $62,400 last year as a paid member of the PRB.

On March 14, Gov. J.B. Pritzker pulled that appointment as Cerda appeared not to have enough Senate support for approval, and the governor sent a letter to the state senators in charge of the appointment process urging action on his outstanding appointments.

The PRB appointment process has come under scrutiny by Republican members of the Senate in the past year. PRB members Oreal James and Eleanor Wilson were appointed on April 2, 2019, but Pritzker pulled their appointments on March 19, 2021. They were reappointed two days later.

The governor can withdraw nominations and reappoint the same appointee to restart a 60-session-day clock in which their appointments could be heard by the committee. This practice is allowed under Senate rules and has been used by previous governors.

James, Wilson and Jeff Mears, all Pritzker appointees to the PRB, have not been approved by the Senate. Three other members, Kenneth Tupy, LeAnn Miller and Jared Bohland also remain unconfirmed by the Senate.

“It is critical to both public safety and justice that the Senate Executive Appointments Committee act on this so that this board can fully function,” Pritzker said in a letter dated March 15.

A copy of the letter addressed to Sen. Laura Murphy, D-Des Plaines, and Sen. Jason Plummer, R-Edwardsville, was obtained by Capitol News Illinois. The letter urged the Executive Appointments Committee, which Murphy chairs, to act on the appointments.

“Without the adequate number of members, one of the key PRB functions that will be jeopardized is the responsibility for conducting final revocation hearings. This function is not often reported on, but it is essential for public safety,” Pritzker wrote.

Pritzker was referring to the revocation hearings for offenders who have re-entered the Illinois Department of Corrections because they have violated the conditions of their parole. Final revocation hearings must occur within 90 days of the date the offender returns to IDOC custody. If the hearing is not held in time, the offender will be released and deemed not to be in violation of their parole.

There were 4,595 revocation hearings last year, according to the letter, and hearings across the state are held 15 to 20 times per month. Three board members must be present at each hearing, according to state law, and as many as three such hearings are scheduled in different parts of the state on the same day.

Thus, Pritzker said in the letter, approval of his appointees is needed to ensure all meetings have the minimum number of members.

“I am committed to ensuring all public safety functions of the PRB are maintained and my administration continues to work to fill vacancies on the board,” Pritzker said.

Plummer, a Republican who sits on the committee, has raised the issue of PRB appointments for more than a year.

Earlier this month, Plummer questioned why Pritzker pulled the appointments for Aurthur Mae Perkins and Joseph Ruggiero. Both appointees, originally made by Republican former Gov. Bruce Rauner, have served on the PRB without Senate confirmation for nearly three years each.

Plummer said Wednesday that the process has been broken and manipulated by politics and unconfirmed board members are involved in the release, pardon and commutation process.

“The people of Illinois are being put in harm’s way due to this lack of accountability,” Plummer said.

The governor’s office said any questions about timing of appointees should be directed to the Senate.

“The governor’s main concern is ensuring the Prisoner Review Board can continue to do its important work, like making sure parole violators are returned to prison and focusing on justice for the rehabilitated,” a spokesperson said in a statement. “As the letter said, the administration hopes the appointees will be confirmed as soon as possible.”

In his letter, Pritzker also alluded to members “politicizing” the PRB process and said he was open to increasing transparency of the board. He also noted the clemency and full hearings of the board are open to the public and anyone can testify. Hearing schedules are available on the PRB website and clemency petitions and decisions are subject to Freedom of Information Act requests.