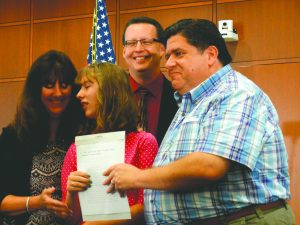 After signing a bill expanding “Ashley’s Law,” which gives students the right to use medical marijuana at school, Gov. J.B. Pritzker gives a copy of the bill to Ashley Surin, after whom the law is named, and her parents, Maureen and Jim Surin, of Schaumburg. Pritzker signed the bill during a ceremony Monday in Springfield. (Photo by Peter Hancock/Capitol News Illinois)

SPRINGFIELD — Democratic Gov. J.B. Pritzker celebrated a pair of new laws Aug. 12 that expand the state’s medical marijuana program, including one that gives students more options for taking the drug at school.

“As we continue to reform state government so that it better serves its families, we must do so in a way that advances dignity, empathy, opportunity and grace. In each of these things, this legislation moves us forward,” Pritzker said at a bill-signing ceremony in Springfield.

One of the bills expands a 2018 law known as “Ashley’s Law,” which authorizes schools to allow parents, guardians or other caregivers to administer cannabis-infused products to a student who is authorized to use medical marijuana.

The law is named after Ashley Surin, a Schaumburg student who uses marijuana-based products to manage a seizure disorder she developed at age 3 while undergoing chemotherapy to treat cancer she had had since age 2. She won the right to use marijuana-infused products at school in a federal court battle that was decided in January 2018.

“We’re so proud of her, and we’re so happy this program is continuing and expanding because it’s like a miracle that our daughter is doing so well, and I can’t wait to see what she does next,” Ashley’s mother, Maureen Surin, said during the ceremony.

Since enactment of the first medical marijuana law in Illinois in 2013, Pritzker noted, more than 80,000 patients across the state have received authority to use marijuana to treat certain medical conditions.

Under Senate Bill 455, which takes effect Jan. 1, schools will be required to allow a school nurse or administrator to administer cannabis-infused products to a student who is a registered qualifying patient. It also allows students to self-administer the medication, under the direct supervision of a nurse or school administrator, and it expands a student’s access to the drug to include before- and after-school activities.

Pritzker also noted the signing of Senate Bill 2023, which he actually signed Friday, expanding and making permanent the medical cannabis pilot program, which was scheduled to sunset next year.

Among other things, it adds 11 conditions for which a person may use medical cannabis, including autism, chronic pain, migraines, osteoarthritis and anorexia nervosa. It also allows qualifying veterans access to medical marijuana as part of an Opioid Alternative Pilot Program.

It also expands the list of medical professionals who can certify patients to use medical marijuana beyond medical doctors to include advance practice registered nurses and physician assistants.

The bill further requires state regulators to award any remaining medical marijuana dispensary licenses under the same competitive application review rules that apply under the new adult recreational marijuana law, meaning additional points are awarded to “social equity” applicants who come from high-crime or high-poverty neighborhoods, or applicants who have previously been arrested or convicted of minor marijuana offenses that are now eligible for expungement.

“This is yet another piece of legislation that expands equity across our state,” Lt. Gov. Juliana Stratton said. “By making the medical cannabis program permanent, expanding access to veterans and expanding the list of medical conditions, we are ensuring that families all across our state have access to the health care that they deserve.”