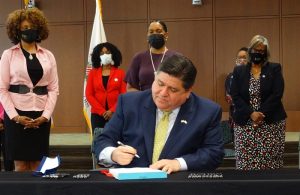 SPRINGFIELD – Gov. J.B. Pritzker declared health care “a right, not a privilege” Tuesday as he signed a massive reform bill backed by the Illinois Legislative Black Caucus, the last of four policy pillars introduced as part of an anti-racism agenda last year.

The “Illinois Health Care and Human Services Reform Act,” contained in House Bill 158, is a 224-page bill made up of over a dozen provisions meant to end inequities in the Illinois health care system on the basis of race, income and other socioeconomic factors.

It also seeks to expand access to health care for low-income and rural residents, including residents of color, as well as broadly expand the state’s network of mental health services.

“This legislation advances a key belief of mine that I know is shared by everyone standing here, and millions of residents across Illinois: Health care is a right, not a privilege,” Pritzker said Tuesday, April 27 at a news conference at Memorial Medical Center in Springfield. “For too long, too many Illinoisans have been denied that right, whether through health care deserts, inexcusable delays in Medicaid applications, through lack of access, through high premiums, through doctors untrained to recognize symptoms on Black skin.”

Among other provisions, the bill creates two Medicaid-based commissions, one to review the state’s managed care programs delivering Medicaid services and one to direct Medicaid contracts towards businesses owned and operated by minorities, women and residents with disabilities.

The measure also focuses on identifying the causes of violence — creating the Underlying Causes of Crime and Violence Study Act — which will seek to create a process to identify “high violence communities” and prioritize state dollars to address the underlying causes, according to a news release from the governor’s office.

A new certified class of medical professional, known as a “Community Health Worker,” is created under the new law to act as a coordinating bridge between social programs and health care services.

Advocates said the legislation attempts to overhaul every aspect of the Illinois health care system from birth to elder care.

Chief Senate sponsor of the bill, Sen. Mattie Hunter, D-Chicago, said the COVID-19 pandemic and subsequent protests calling for racial justice and equity were influential in showing disproportionate health impacts and barriers to quality care for communities of color across the state.

“Although we have been fighting to eradicate racism for decades, last year, my colleagues and I saw a unique opportunity to make the most radical structural changes in Illinois that they’ve ever seen,” Hunter said.

“The legislation before you is deeply informed and methodology-crafted. We have spent many months and sleepless nights just on the health care pillar alone,” she added.

“The statistics in the Black community are sobering,” Lilly said. “We suffer from higher rates of chronic diseases, diabetes and hypertension, heart disease, asthma and many cancers. … Black people’s life expectancy should not be determined by their ZIP code. They should just be able to live where they are feeling comfortable in supporting their families.”

Republicans mounted opposition to the legislation on the basis of its price tag, which they have cited as being anywhere between $5 billion and $12 billion to implement fully.

Democrats have disputed those estimates while maintaining that the benefit of improving health care outcomes for Illinoisans would be worth the cost.

A Republican request for a fiscal note was ruled inapplicable by Democratic leadership during House debate on the bill.

A statement from the House Republican caucus issued Tuesday criticized Pritzker for “signing a bill that will cost billions of dollars of fantasy money we just don’t have.”

When asked about the costs of the health care reform bill Tuesday, Pritzker described the bill as “reasonable” and accused Republican opponents of “exaggerating” the actual cost.

A majority of the act’s provisions are subject to state appropriation, meaning the General Assembly will need to vote in the future to allocate the funding needed for each measure, despite the law being effective immediately upon Pritzker’s signature Tuesday, April 27.

“We’re going to work very hard to try to implement the provisions of this law,” Pritzker said. “It will take us some time and effort. I’ll be working together with the legislators to make sure that that happens.”

One Republican Senator, John Curran of Downers Grove, attended the April 27 news conference with members of the Black Caucus, the health care community and the governor. He said he was proud to have supported the measure in the Senate.

“It addresses issues of great importance — health care access, infant mortality and maternal mortality, mental health and substance abuse treatment, and hospital access in low-income and underserved communities,” he said. “This legislation will go far in addressing racial and other imbalances within the Illinois health care system, and takes important steps in expanding medical services in our lower income communities.”

The bill was the final pillar of the Black Caucus legislative agenda unveiled last year to be signed into law and the only one that did not pass in the previous General Assembly.

The health care package, which failed to gain majority support during that session, was retooled and eventually passed by the General Assembly in March following deep revisions.