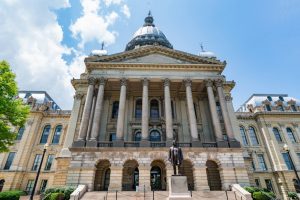 SPRINGFIELD – Gov. J.B. Pritzker signed a pair of bills Friday, June 4 that redraw state legislative and appellate court districts, despite the fact that official U.S Census data needed to ensure equal representation has not yet been delivered.

In a statement released that afternoon, Pritzker said he signed the measures after reviewing the maps to make sure they complied with state and federal law by ensuring minority representation.

“Illinois’ strength is in our diversity, and these maps help to ensure that communities that have been left out and left behind have fair representation in our government,” Pritzker said in the statement. “These district boundaries align with both the federal and state Voting Rights Acts, which help to ensure our diverse communities have electoral power and fair representation.”

Reaction to Pritzker’s announcement was swift. House Speaker Emanuel “Chris” Welch called the signing “a win for the people of this great state.”

“With Governor Pritzker’s signature, people of Illinois can be confident in a legislative map that is reflective of the diversity that we see in every corner of our state,” Welch said. “Not only does this map adhere to state and federal laws, but it is a product of more than 50 public hearings where citizens came to tell us what their communities look like to them.”

But Republican Sen. Jason Barickman of Bloomington, the minority spokesman on the Senate Redistricting Committee, accused Pritzker of going back on his campaign pledge to support an independent mapmaking process.

“The people of Illinois deserve a fair, transparent process that allows them to choose their representatives in government,” Barickman said. “Pritzker turned his back on them and chose instead to use his signature to further enshrine the broken status quo of politicians picking their voters.”

The redistricting process is highly political, even in a normal year, because it gives the majority party the ability to draw district maps that will favor them for the next decade.

But it was especially heated in the General Assembly this year, not just because the release of detailed census data has been delayed, but because, as a candidate running in 2018, Pritzker supported creating an independent redistricting commission — the so-called “Fair Maps” proposal — and had vowed to veto any maps drawn by lawmakers or their staffs. 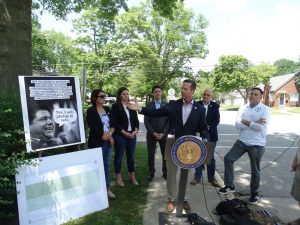 “No one twisted his arm to say what he said,” Republican Congressman Rodney Davis, R-Taylorville, said during a news conference June 3 in Springfield. “No one told him, ‘You have to make this pledge.’ No one told Gov. Pritzker when he was campaigning, that he needed to campaign and be in favor of a fair map process.”

During a separate interview Thursday afternoon, however, Pritzker said the opportunity to create an independent commission had passed and that Republicans were trying to delay the process for their own political advantage.

“They (the General Assembly) took off the table a constitutional amendment for an independent redistricting commission. That never happened in the legislature,” Pritzker said in a phone interview with Capitol News Illinois. “So then you’re left with, the two sides really need to work together, whether that was in a construct of an independent commission or just working in a bipartisan fashion. The Republicans seemed not to be interested in doing that.”

“What they really wanted was a map that favors them,” Pritzker continued. “You know, they don’t like to say that, but that’s what they were after.”

Under the Illinois Constitution, lawmakers have until June 30 to approve a redistricting plan. After that, the process goes to an eight-member bipartisan commission. If that commission fails to approve maps by Aug. 10, a ninth member is added, who could come from either party, by drawing a name out of a hat, and that commission is given until Oct. 5 to come up with new maps.

Because the 2020 census data will not be available until after the June 30 deadline for lawmakers to approve maps, Democratic leaders in the General Assembly moved forward using population estimates from the previous five years of data from the Census Bureau’s American Community Survey.

Republicans, along with several voting rights advocacy groups that included CHANGE Illinois, the League of Women Voters, Common Cause Illinois and others, had cautioned against that method, arguing that ACS data is subject to a margin of sampling error and that it tends to undercount certain subsets of the population.

“As was evident from the final redistricting hearings and statements issued in response to the Illinois General Assembly’s map proposals, diverse communities across the state — representing Black, Latinx, Asian-American, Muslim, Jewish, elderly, young, urban, and rural — rejected these maps,” Madeline Doubek, executive director of CHANGE Illinois, said in a statement June 4. “These maps do not give us equitable representation for the next 10 years. These maps signed by Governor Pritzker simply do not reflect the community input so many Illinoisans tried repeatedly to give to their elected officials.”

During a virtual news conference Friday, Senate Republican Leader Dan McConchie, of Hawthorn Woods, said the GOP would “use every tool at our disposal to return power to the people once again,” but he stopped short of saying Republicans would back a legal challenge to the maps.

“We’re going to examine all the options. We’ll look at that this weekend and see how we can best return power to the people,” McConchie said.

Pritzker, meanwhile, has said he anticipates a legal challenge. But he also said lawmakers could return in the fall to make adjustments to the maps once the official census data arrives.

“I do expect the Legislature would revisit the maps if the census data that comes out is significantly different or out of the bounds of the ACS data,” he said. “The census data is going to come out in August, so we’ll know more then. So I think it was prudent. I know the Republicans are already planning to sue. That’s their goal. Their goal is just to throw a wrench into the process hoping to get their own map.”

In addition to those measures, Pritzker also signed House Amendment 1 to SB 2661, which redraws districts for the Cook County Board of Review, a body that hears property tax appeals in Cook County.