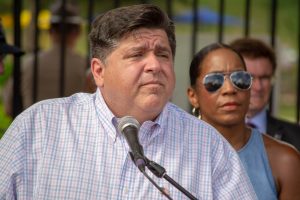 Gov. J.B. Pritzker stands next to Lt. Gov. Juliana Stratton as he takes questions after a ribbon-cutting ceremony at the Illinois State Fair on Aug. 8 in Springfield. Pritzker on Monday vetoed a bill that would have provided a sales tax exemption on the sale of private jet parts and components retroactive to 2010 and continuing through 2024. (Photo by Jerry Nowicki/Capitol News Illinois)

SPRINGFIELD — Democratic Gov. J.B. Pritzker on Nov. 25 vetoed a bill that would have provided a sales tax exemption on the sale of private jet parts and components retroactive to 2010 and continuing through 2024.

Sen. Rachelle Crowe, a Glen Carbon Democrat and lead sponsor of the bill in the Senate, argued that the tax exemption had been on the books for years, but was allowed to lapse with almost nobody noticing. As a result, she said, aircraft repair companies continued not charging their customers for the tax, and she said it would be “absurd” to ask those companies to go back and collect it from their customers now.

Pritzker, however, said in a statement that those companies owe $50 million in past-due taxes, interest and penalties. He said the bill would not only forgive that debt but would provide another $10 million in tax breaks in each of the next five years.

“Giving private aircraft companies tens of millions of dollars in past due tax forgiveness is not the right fiscal decision for our state as we face billions in debt associated with unpaid bills, a multi-billion-dollar structural deficit, and critical needs in schools and public safety services,” Pritzker said in his veto message.