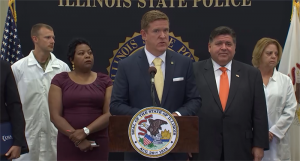 SPRINGFIELD – The Illinois State Police announced Friday, June 3 that all sexual assault evidence is being processed within the 180-day timeframe outlined in state law — bringing to zero the number of legally “backlogged” cases that rose as high as 1,815 in March 2019.

It’s the first time all such evidence is being processed within 180 days as required by a 2010 law, according to the governor’s office.

“We have finally reached this mark that the General Assembly put down, this mark of 180 days, over a decade ago. Complying with that, and finally getting under 180 days, is just the first phase of that enterprise and we are going to be holding ourselves accountable to reaching the 90-day mark in the next phase,” Illinois State Police Director Brendan Kelly said at a news conference.

The governor’s office said over the past two years, ISP reduced its total forensic backlog by 72 percent, while the backlog in drug chemistry evidence processing decreased by 90 percent from Feb. 2019 to the end of 2021.

Kelly said ISP has a goal of bringing a sense of closure to crime victims by processing the evidence that may lead to an arrest.

She said when ICASA first became part of a task force addressing the backlogs, “the horror stories of evidence collection backlogs were numerous.”

“Kits were found untested across the state. The wait time for results from kits that were tested stretched into years instead of months or weeks,” she said. “Today we can acknowledge substantial progress.”

“But our work here isn’t done,” she added. “We must continue to address the barriers both internal and external that prompt us to recognize six months, or 180 days, as cause for celebration, because six months is still a long time for survivors to wait. We cannot be complacent with our progress.”

The Rebuild Illinois capital infrastructure plan signed in 2019 included $76.6 million for a new combined crime laboratory and administrative facility in Joliet. This year’s budget also included $5.4 million for increased staffing and equipment at a new ISP forensic lab in Decatur.

Previously, ISP received a $12.5 million grant to bring the number of cameras on Chicago expressways to 300, starting on the Dan Ryan expressway.

While an added 6,300 miles of roadway — on top of about 230 miles in the pilot program — will be eligible for cameras under the expanded program, the new legislation contains no guidance for which roadways would receive them.

The budget contains $20 million from the Road Fund for the expansion.

Previous law only allowed the footage to be used to investigate firearm offenses and to monitor roadway conditions.