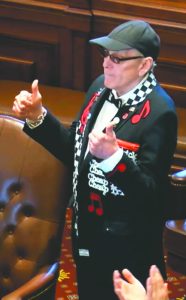 Rick Nielsen, recently inducted into the Rock and Roll Hall of Fame with his rock band Cheap Trick, was introduced on the Senate floor Wednesday, May 15 by Sen. Dave Syverson, of Rockford. Nielsen, who was born in Rockford and still lives there, was at the Capitol to promote legislation that would allow for more casinos in Illinois, potentially including his hometown. (BlueRoomStream.com)

SPRINGFIELD – Rockford Mayor Tom McNamara said lawmakers have to move quickly before the city’s chances to build a casino are “virtually eliminated” by a northern rival.

Just 15 minutes away in Beloit, Wisconsin, the Ho-Chunk Nation tribe awaits federal approval from the Bureau of Indian Affairs to build a casino there, the Beloit Daily News has reported.

Some estimates say that project could employ up to 5,000 people and generate more than $5 million in annual revenue for the local government.

If that casino is built before Rockford has a chance to build one, “Illinois residents would bypass our community and our state and take their dollars to Wisconsin,” McNamara said.

But it’s unclear if Illinois lawmakers will pass a “gambling expansion” bill in time for the end of the legislative session on May 31.

No language for such a bill has been filed, but it would likely be similar to ones that were proposed in prior years, but failed to pass, which would have created six more state casino licenses. Illinois currently has 10 casinos.

McNamara said revenue from a Rockford casino would help alleviate the city’s pension problems, because “in the not-too-distant future, 100% of our annual property tax revenue will be going to our state-mandated pension contributions.”

“We cannot afford to be outflanked by our neighbors up north yet again,” he said.

While there’s no timeline for federal approval of the Beloit casino, a February report from Wisconsin’s Division of Gaming estimated the project is “four years from approval.”

Rick Nielsen, a Rockford native and guitarist with rock band Cheap Trick, was in Springfield on Wednesday to push for a casino in his hometown. He and Rockford-area lawmakers held a news conference at the Capitol, and Nielsen also made an appearance on the Senate floor.

“I’ve been there fighting for some sort of casino going on for 15 or 20 years, and I guess my legislative voice is not very strong, but now it is because I’ve got these guys behind me,” Nielsen said, motioning to the lawmakers with him during the news conference.