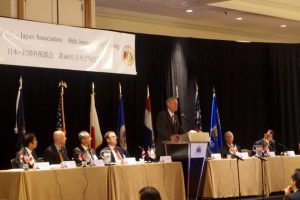 Gov. Bruce Rauner said economic and political reforms will help the state capture as much investment from Japan as possible and, in turn, grow the state’s economy.

During the Midwest U.S.-Japan Association Conference in St. Louis on Monday, Japan Consulate General at Chicago Toshiyuki Iwado said his country’s businesses are ready to boost partnerships in the Midwest.

“The Midwest should market itself first as a region so that Japanese companies know that this is the place to be. The more the Midwest shines, the more individual states will benefit.”

“It is important for all of us,” Iwado said, “to foster a robust, long-term business relationship both ways.”

That relationship is already strong in Illinois, with Rauner highlighting the state being the fourth-largest U.S. exporter to Japan, but Rauner also said Japanese businesses tell him they want to see some changes in Illinois.

“Many firms here from Japan and others would like to expand more in Illinois. Some, we’re going to convince to do it because they believe in our future, but others say ‘Governor, please show that you’re going to get reforms,’” Rauner said.

“What many would like to see is that we reform our political system in Illinois so that democracy is working for the people again,” Rauner said. “Many investors, many company owners, want to see that democracy and taxpayers have a voice.”

Illinois is one of nine Midwest states that make up the Midwest U.S.-Japan Association.