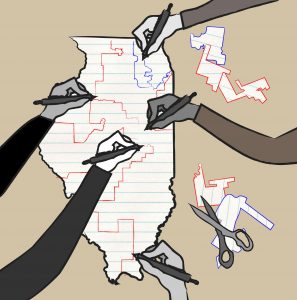 Coalition for Honest and New Government Ethics, or CHANGE Illinois — a group that has long advocated for changes to the redistricting process — is hoping to gain more citizen input on stopping gerrymandering through an online application it helped develop. (Courtesy of CHANGE Illinois)

SPRINGFIELD — Reformers say it’s time for Illinoisans to “advocate for themselves” when lawmakers redraw the state’s political boundaries in a few months.

That’s the message the Coalition for Honest and New Government Ethics, or CHANGE Illinois — a group that has long advocated for changes to the redistricting process — intends to deliver through an online application it helped develop.

This latest attempt by CHANGE at reform comes after the failure of a proposed constitutional amendment that would have created an independent redistricting commission. The amendment did not get the requisite legislative support it needed before a May 3 deadline, after the Illinois General Assembly halted its session in March in response to the novel coronavirus pandemic.

The state’s Constitution specifies that lawmakers have until June 30, 2021, to create an agreed-upon redistricting plan. If they are unsuccessful, a bipartisan commission will be convened to finish the job.

Ryan Tolley, policy director for CHANGE Illinois, said both the House and Senate held at least 15 hearings in 2011 — the last year legislators were tasked with drawing new maps — to hear from communities about their representation needs. The group’s partnership with Representable is meant to encourage residents to attend any hearings with tangible proposals.

“Even though we weren’t able to change the process, we can’t just let the remap go forward without making a concerted effort to ensure our communities are playing an active role in advocating for themselves,” Tolley said. “It’s so vitally important for these communities to be at the table, because everyone’s ability to advocate for themselves over the next decade is going to, in part, be dictated by this.”

Complicating the General Assembly’s timetable this year is uncertainty as the U.S. Census Bureau will get states, President Donald Trump and Congress the data it is tasked with obtaining and analyzing in time.

Due to COVID-19, census workers were delayed by three or four months in outreach and counting efforts this year, Jay Young, executive director of Common Cause, said. The bureau asked for an extension to report information to the federal and state governments, but later retracted that request. Common Cause is a nonpartisan government watchdog group.

“Whatever is going to happen, it is not clear when data will ultimately get first to the president and then to the states to allow them to do their remap,” Young said. “There are lots of things that feel broken right now, and even if you set aside all the things already going on in the General Assembly that makes things complicated and confusing and hard to predict, this is the sort of task that is going to be especially complicated.”

The situation in Illinois will be “particularly messy,” he added, in underserved communities classified as traditionally hard to count.

In a news release announcing Representable, CHANGE Illinois wrote that “in too many previous redistricting cycles, politicians draw districts that splinter and split up neighborhoods and communities of people with common bonds… Splitting up neighborhoods or natural communities dilutes people’s political power and advocacy strength.”