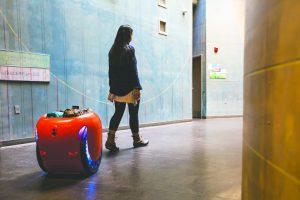 A prototype of the Gita mobile carrying device is shown in this photo from Piaggio Fast Forward, the company developing the personal robot. A bill passed the Illinois House last week that would regulate such devices.

SPRINGFIELD — Futuristic technology could give Illinoisans their own personal robots that follow wherever they go, and carry supplies like groceries.

In anticipation of a summer rollout of this technology, the Illinois Legislature is moving a bill to regulate it.

But many aspects remain unclear, including how strong demand will be and what the technology will look like in its final form.

Chicago Democratic Rep. Jaime Andrade is sponsoring House Bill 245, which seeks to regulate the use of “mobile carrying devices.” It is headed to the Senate after being passed unanimously by the House last week.

“When the state’s vehicle code was written, people didn’t think of this being a vehicle,” Andrade said of the personal robots. “It’s not a vehicle, but we still need a description and definition for it.”

His bill is primarily in response to a particular product, the personal robot Gita, in development at Massachusetts-based Piaggio Fast Forward, an affiliate of the Italian company that makes Vespa scooters.

Gita is a 50-pound spherical robot Piaggio is designing to carry things to make it easier for a pedestrian to walk, ride a bike, or get around by other means.

It tracks and follows the movements of a belt worn by an owner, and uses cameras to survey the surrounding environment, according to the company’s website.

Neither Andrade nor the only organization to initially oppose the bill knows when the technology might show up on sidewalks, as it is still a prototype.

Aaron Winters, an Illinois lobbyist who represents Piaggio, said it’s expected to be available by this summer, which is “why it is important for the legislation to pass.”

But the product’s potential raises concerns about pedestrian safety and home rule powers, among other things.

Kyle Whitehead is the spokesman for the Chicago-based Active Transportation Alliance, a nonprofit group that advocates for better biking, walking and public transit in the Chicago area.

He said ATA was originally opposed to Andrade’s legislation because of pedestrian comfort and safety.

“We were concerned with the potential that these devices would result in safety issues, especially for older adults and people with disabilities, or people who are generally not as mobile and able to get out of the way as easily,” Whitehead said.

One concern resulted in an amendment changing from 25 feet to 10 feet the maximum distance between a personal robot and its owner.

Another amendment prohibited people from using the device to transport another person.

“You’d think you wouldn’t have to legislate this,” Andrade said. “But someone might put their baby in there and god forbid they forget them, you know.”

Whitehead said the third of the large concerns — also eased by the amendment — was making sure home-rule municipalities can regulate the devices when they start showing up on city sidewalks.

“There’s so much uncertainty around this device — what the speed would be, what the weight would be, how quickly it would be adopted and how prevalent it would be,” Whitehead said. “We want to make sure municipalities have the ability to go back and regulate these devices.”

Winters, the lobbyist for the creator of Gita, said the company was happy to see the legislation pass the House last week.

“Mobile carriers such as the Gita are positioned to help Illinoisans walk more, get out of their cars and live a more active lifestyle,” he said.

Piaggio employees could not be reached for this story to provide a specific launch date or updates to the product prototype.

While Andrade’s legislation received few witness slips in support or opposition to the measure, one stood out.

“I think it is really cool and sci-fi like,” Slade said by email.