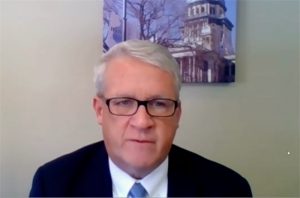 However, Pritzker’s proposal to end what he called “unaffordable corporate loopholes” would require action by the Illinois General Assembly.

“This will be one of the most challenging budgets this government has ever had to craft, but I know there are willing partners in the General Assembly,” Pritzker said during his prerecorded budget address on Wednesday, Feb. 17 adding that General Assembly members incorporated their ideas, “like cutting corporate loopholes that force the middle class to pay more.”

Republican lawmakers decried the proposal as a “tax increase,” and business interest groups criticized the plan as unfairly targeting retailers.

“At a time when businesses across the state are grasping at straws to stay afloat, after being shuttered due to executive orders, Gov. Pritzker is now proposing a tax increase on all of them, saying they are just loopholes,” said Republican House Minority Leader Jim Durkin, from Western Springs.

Two of the tax deductions eliminated in Pritzker’s plan were passed under the federal Tax Cut and Jobs Act in 2017, including the bonus depreciation deduction for certain property, according to senior budget officials who gave a background briefing before the address.

The governor’s budget plan calls for rolling back this bonus depreciation that would have allowed business owners of certain depreciable properties to claim up to 100 percent of the depreciation as a tax deduction.

This rollback would preserve $214 million of the total $932 million proposed by Pritzker’s tax deduction closures.

The second so-called “corporate loophole” created under the TCJA that Pritzker proposed cutting is a deduction for dividends, or shareholder profits, by multinational corporations with foreign subsidiaries.

Pritzker’s budget officials said this change under TCJA allows large multinational corporations with foreign subsidiaries to deduct the dividends that their foreign subsidiary pays to a parent company at a lower tax rate than dividends paid to a domestic subsidiary.

Durkin also condemned Pritzker for including the Invest in Kids Scholarship Tax Credit Program — a scholarship program for low-income students who attend private or parochial schools — in his list of proposed cuts to tax credits.

“(Pritzker) is now calling a program that provides scholarships to 3,800 low-income students in Illinois and families that are struggling to get by, with an average of $35,000 of household income, to help them get an education, to help them find a school if they want their child to succeed. Basically, what the governor is doing with his budget address today is shutting down that program,” Durkin said in a news conference after Pritzker’s address.

Pritzker’s plan would decrease the tax credit, from 75 percent to 40 percent, those individuals and businesses receive for donating to the Invest in Kids program.

Pritzker’s plan would also cap deductions that businesses can claim as net operating losses at $100,000 per year for the next three years, and it would place a $1,000 per-month cap on the state’s retailer’s discount, which allows retail businesses to be reimbursed monthly for 1.75 percent of the sales tax they collect.

“While the governor claims he is focused on rebuilding the state’s economy, it is counterintuitive that his first step is to raise costs on businesses by eliminating the retail discount, which only partially reimburses store owners for administering and collecting sales tax on behalf of the state,” Karr said in a news release.

But Illinois Comptroller Susana Mendoza, in an interview, said the elimination of tax credits and tax deductions for businesses was one option among a number of bad options for balancing the budget.

“There’s no such thing as a painless cut. Republicans are going to have to make a choice as to whether they want to continue tax credits, or to inflict devastating damage on communities of the vulnerable people in Illinois who are already just hanging on by a thread. So, you know, neither option is a good one,” she said.

Senate President Don Harmon, D-Oak Park, said in a news conference after the address that an examination of some the state’s tax incentive programs is overdue, adding it’s worthwhile for the state to “see what works and get rid of what doesn’t.”

“Our first priority with any tax incentive needs to be jobs for hardworking Illinoisans. So I think it’s a fair question to ask, ‘What are the hard working taxpayers of Illinois getting in return for these corporate tax breaks?’” Harmon said.