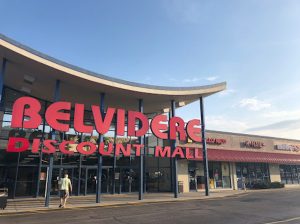 : Waukegan’s Belvidere Discount Mall. Waukegan saw a 7.6 percent drop in sales-tax revenue between February and March, according to the Illinois Department of Revenue. Many municipalities and counties in the area saw sales-tax revenues dip in March as the impact of the coronavirus began to be felt. (Imperial Realty photo)

A “perfect storm” of issues has sucked $2.7 billion out of Illinois’ coffers, according to a state finance expert.

Jim Muschinske, revenue manager for the state’s Commission on Government Forecasting and Accountability, said COVID-19 impacts, including pushing back the filing of income taxes, derailed revenue receipts. More than half of that revenue loss comes from pushing “Tax Day” from April 15 to July 15.

“Gross personal income taxes fell a whopping $1.977 billion, or $1.678 billion on a net basis, while gross corporate income taxes dropped $482 million, or $377 million net,” Muschinske said in a commission report for April. “Again, the decreases were fueled by effects of COVID-19, Tax Day deadline changes, and the phenomenally strong performance of income taxes in April 2019. Sales taxes, after holding up in March due to receipts in ‘the pipeline’ couldn’t escape the economic shutdown, as gross receipts dropped $143 million, or $146 million net.”

Despite many municipalities, such as Chicago and Waukegan, and counties, such as Cook and McLean,   seeing sizeable percentage sales-tax losses in March because many businesses were shuttered for the last 10 days of the month, some areas were able to weather that storm. 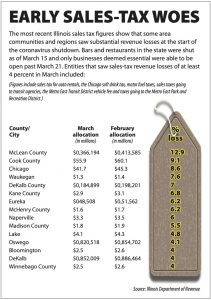 April sales tax numbers for individual cities and counties were not available from the Illinois Department of Revenue as of press time.

Muschinske said he does not expect the state’s financial picture to brighten anytime in the immediate future.

“The impacts of the COVID-19 virus on revenues are quickly manifesting in the economically related sources, such as income and sales taxes,” Muschinske said. “As we move forward over the remaining months of the fiscal year (the state’s fiscal year ends June 30), its consequences are expected to continue as job losses, impacts on business, and severely curtailed consumer activity will add to the state’s fiscal stress.”

“As demonstrated by the mostly normal performance of March revenues, the impacts of the COVID-19 virus on revenues are only in their infancy,” he said in commenting on the somewhat steady March sales-tax numbers. “As we move forward over the coming months, the economic shutdown will begin to manifest on sales tax, as well as components of both personal and corporate income taxes.  However, the magnitude and duration of these likely abrupt revenue changes are too uncertain at this juncture to make any confident projections.”