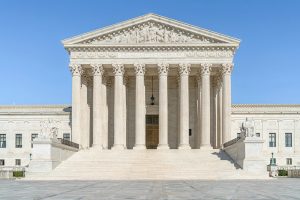 SPRINGFIELD — Lawyers for an Illinois man who was sentenced to 130 years for a murder when he was 16 years old are asking the U.S. Supreme Court to clarify how life sentences for juveniles should be reevaluated in light of recent U.S Supreme Court decisions against that practice.

In the Montgomery case, the court clarified that its decision in the Miller case can be applied retroactively, and “requires a sentencer to consider a juvenile offender’s youth and attendant characteristics before determining that life without parole is a proportionate sentence,” according to the opinion.

Lusby’s 130-year sentence for the 1996 rape and murder of elementary school teacher Jennifer Happ in Joliet was not a mandatory sentence, but it is a de facto life sentence because it amounts to a lifetime in prison.

In October, Lusby exhausted his legal avenues in Illinois when the Illinois Supreme Court ruled in a 6-1 decision that his 2002 sentencing hearing did not violate U.S. Supreme Court case law because the sentencing judge sufficiently considered his age and factors related to his youth.

In their petition to the U.S. Supreme Court, Lusby’s lawyers argued that the court should clarify the procedures for reconsidering actual and de facto life sentences for juvenile offenders who were sentenced before the protections in the Miller and Montgomery cases were established.

Since those decisions were issued, state courts have varied widely in their application of the precedents on sentences imposed before 2012, the petition states.

For example, in 30 states and Washington, D.C., all juveniles sentenced to life in prison without parole prior to Miller are now either automatically entitled to a new sentencing hearing or have become eligible for parole or judicial modification of their sentence.

In other states, juvenile homicide offenders are not eligible for parole and are not afforded automatic review of their sentences. Those states also have differing approaches for handling juvenile resentencing in cases decided before 2012.

However, the law does not apply retroactively.

“Applying Miller and Montgomery, juveniles must be given some sort of process by which they can present and the court can consider factors related to their youth in light of what we now know based on Miller,” Lusby’s lawyers wrote in their petition to the U.S. Supreme Court. “The practice of Illinois and other States that does not require that the record show that the trial court who sentenced a juvenile homicide offender to (life with the opportunity for parole) prior to Miller actually considered the offender’s youth and attendant characteristics fails to ensure that basic constitutional mandate.”

At the time of the crime, Lusby had a criminal record that included violent offenses and was expelled from school due to his participation in a gang. His sisters were also involved in crime, and their father was absent from their lives, the petition states.

“But, again, nothing about Lusby’s background — or his inability to extricate himself from those surroundings as a 16-year-old — was considered by the court before sentencing Lusby to die in prison,” the petition states. “A proper Miller hearing would take into account this evidence, unlike the hearing received by Lusby prior to Miller.”

Lusby is represented by lawyers with the Illinois Office of the State Appellate Defender, including Douglas R. Hoff.

A spokesperson for the Attorney General’s Office, which represents the state in this case, did not comment.

The state’s response to Lusby’s petition is due July 2.