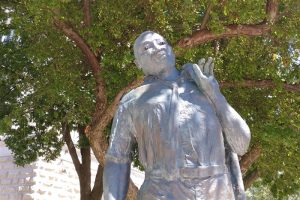 A statue of Martin Luther King Jr. is pictured across the street from the Illinois State Capitol. Secretary of State Jesse White has called for a new depiction of King to be places on Capitol grounds. (Capitol News Illinois file photo)

SPRINGFIELD — Illinois Secretary of State Jesse White on Tuesday, May 4 said it’s time for the state to construct a new statue commemorating Martin Luther King Jr., as the current statue’s rendering “does not properly reflect Dr. King,” White said in a news release.

White said he would personally contribute the first $5,000 in funding the new statue that would be situated in a more prominent location on the Capitol grounds.

The current 300-pound bronze likeness of King is located across the street from the Capitol building, on the corner of 2nd Street and Capitol Avenue — referred to as Freedom Corner.

“To this day, I remain impacted by Dr. King’s teachings,” White said in a news release. “His values and dignified behavior continue to inspire and resonate with me. I remember Dr. King attending my college basketball games and staying afterward to offer me words of encouragement and support. He made a difference in my life.”

King’s likeness on the Capitol grounds was built in 1988, and he was the first non-Illinois resident to be memorialized with a statue, according to the Springfield visitor’s center.

King’s efforts to oppose segregation in all segments of American society, from housing and schools to public accommodations and private businesses, are often credited with propelling the civil rights movement into mainstream popularity in the 1950s and 60s.

White’s statement comes after House Speaker Emanuel “Chris” Welch, D-Hillside, created a new committee tasked with reviewing statues and monuments on state property. The committee, which met for the first time on April 21, heard testimony from professors and state government associations about how to guide the review process.

Last spring, the Capitol architect board voted to remove statues of Stephen A. Douglas and Pierre Menard, two slave-owning men with ties to Illinois, from the Capitol grounds.

The decision by the board of the Office of the Architect of the Capitol followed a request from former House Speaker Michael Madigan to remove those two monuments from the state grounds.

Douglas was a slave owner who served as Illinois’ secretary of state, state Supreme Court justice and in the U.S. Senate among other roles. He proposed the Kansas-Nebraska Act, which repealed the Missouri Compromise and replaced it with a system for states to decide whether to be pro- or anti-slavery.

Menard, also a slave owner, was the first lieutenant governor of Illinois, and he supported political actions devised to ensure slavery was legal in the state.

When the architect board voted to remove the statues of Douglas and Menard, members also discussed relocating the likeness of King.

King’s statue is located across the street from the Statehouse because of an administrative rule that only allows historical figures related to Illinois to be installed on the Capitol grounds.

At the meeting, the board approved a motion to revise that rule.

The Office of the Architect of the Capitol did not immediately respond to a question about whether the rule has been revised to allow non-Illinois figures on the Capitol grounds.