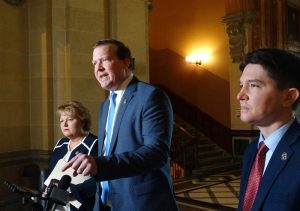 Republican Sens. Terri Bryant, Jason Plummer and Steve McClure, members of the Senate Executive Appointments Committee, speak after a meeting of that committee, urging Democrats to call appointees of the Prisoner Review Board for a hearing. (Capitol News Illinois photo by Peter Hancock)

SPRINGFIELD – Senate Republicans attempted to bypass the Senate Executive Appointments Committee Monday, May 31 after its chairwoman did not call several Prisoner Review Board appointees for confirmation hearings.

The Senate voted unanimously on the floor to waive posting requirements for the appointees, through motions brought forward by Republicans.

But Sen. Laura Murphy, a Democrat from Des Plaines and chair of the Executive Appointments Committee, did not call the appointees at the hearing May 31 morning, the final day before the current session of the General Assembly was scheduled to adjourn.

Republican Sen. Jason Plummer of Edwardsville, a member of the committee, interjected during the hearing, bringing attention to the PRB appointees posting.

“I do not presently see any of those people in the hearing room and I do not see any of them on Zoom. Do you intend to pull the members of the PRB today?” Plummer asked Murphy during the hearing.

Murphy said the PRB appointees would not be heard. She later issued an email statement to Capitol News Illinois.

“The Executive Appointments Committee is operating well within Senate rules — the committee is meeting its constitutional responsibility to confirm the governor’s appointees within 60 session days of nomination,” Murphy wrote.

“My colleagues on the other side of the aisle have chosen to politicize this process, but they are well aware the procedure is routine,” she added. “The Prisoner Review Board is charged with making parole determinations independently, and to involve them in this shameless display of partisanship is inappropriate and dangerous.”

The PRB, a 15-person body appointed by the governor, imposes release conditions for incarcerated individuals being released from prison.

There are currently 10 members of the PRB serving without Senate confirmation.

Four of the appointees in question include Aurthur Mae Perkins, Joseph Ruggiero, Oreal James and Eleanor Wilson. All four were appointed by Pritzker in March and April of 2019, but were never confirmed by the Senate. The governor since withdrew their nominations and reappointed them to restart a 60-session-day clock in which their appointments could be heard by the committee.

Although this practice is allowed under Senate rules and has been used by previous governors, Senate Republicans said they were concerned about the unconfirmed PRB appointees’ “controversial” votes to release certain types of inmates.

“We want to understand…their decision making process,” Plummer said at a news conference following the hearing. “We’ve got a record of decisions they’ve made about violent criminals that they’ve let loose on the streets. I mean literally people who have murdered law enforcement personnel, people who’ve committed several rapes, people who are child molesters, the list is long.”

Following the committee hearing, Plummer rose on the Senate floor to move that the committee be discharged from further consideration, and that the appointment messages be placed on the order for a roll call vote before the full Senate.

Gov. J.B. Pritzker’s press secretary Jordan Abudayyeh, said the governor has no objection to his appointees to the PRB receiving a vote by the committee or the Senate.

“He does object to the GOP playing games with appointments to a board that is responsible for undertaking a difficult and complex mission,” she said in a statement. “These members must be able to make parole determinations entirely independently and free from political interference.

“The members’ appointments and votes are transparent, and their meetings are open to the public. Subjecting members to political grandstanding sets a new and dangerous precedent for this important constitutional function.”