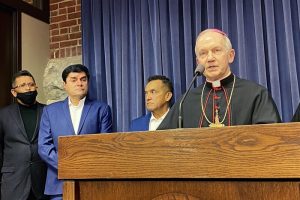 Faith leaders, including Bishop Thomas Paprocki of the Catholic Diocese in Springfield, on Tuesday, Oct. 26 argued at the state Capitol against a bill that would repeal the Parental Notice of Abortion Act of 1995. It passed a Senate committee later that night. (Capitol News Illinois photo by Jerry Nowicki)

The repeal bill passed the Senate Executive Committee on a 9-6-1 vote Oct. 26 shortly after 5 p.m., and passed the full Senate 32-22 shortly after 8 p.m. Its future in the House was less certain as of Tuesday night.

The current law, the Parental Notice of Abortion Act of 1995, was passed decades ago but ultimately took effect only in 2013 after court challenges. It does not require parental consent, only that a doctor’s office notify a parent of the child’s planned abortion 48 hours prior to the procedure.

Discussion on the repeal bill, an amendment to House Bill 370, centered on whether a parent has the right to be informed by a medical professional if their child was scheduled for an abortion or whether the requirement needlessly puts at-risk youths in danger.

“This issue goes beyond the typical pro-life-versus-pro-choice debate,” Republican Sen. Sue Rezin of Morris said in a news conference opposing repeal last week. “We’re way past just discussing our views on abortion. We are literally now discussing if a parent has a right to know about their child’s pregnancy and abortion.”

Rezin and other GOP members of the committee questioned why a minor must have parental consent to get their ears pierced or to receive a vaccine, but would no longer be subject to parental notification of abortion under the repeal.

Emily Werth, a staff attorney at ACLU of Illinois, responded that in Illinois, a minor who is pregnant no longer has to receive parental consent for any medical care. The pregnant minor could undergo a caesarian section, receive a vaccine or get any other medical care without parental notice or consent.

There was also disagreement over whether the bill would help protect human trafficking victims or put them in greater danger.

Representatives of the ACLU and human trafficking victim advocates have argued that there has been no proven link that parental notification serves as a deterrent for sexual traffickers or abusers. 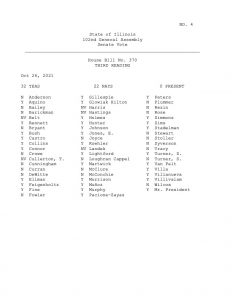 Rezin cited a story by human trafficking survivor Brook Bello, who previously testified that if her mother would have been notified when she was forced as a youth by her traffickers to get abortions decades ago, it may have helped free her from the situation.

“How would repealing this law not help human traffickers?” Rezin asked.

Sen. Elgie Sims, D-Chicago, the bill’s sponsor, responded that the bill would direct a newly-created working group to look for policy solutions for human trafficking and resources to fund them.  The General Assembly also recently created a human trafficking task force, Sims said.

Advocates for repeal also argued in the committee that, in some cases, the parent or guardian is the person that is abusing or trafficking the child, and notifying them would create a dangerous situation.

The GOP pointed at exceptions in the existing law that they said are designed to protect victims.

The current law contains exceptions if the minor was a victim of physical or sexual abuse or neglect by an adult family member, if the minor is married or emancipated, or if the provider determines there is a medical emergency, or if an adult family member waives the notice in writing. A judge can also waive the requirement and has done so approximately 575 times since the law took effect, Werth said.

Werth, who works with the ACLU of Illinois to assist minors in the judicial bypass process, said while bypass works for 99.8 percent of the individuals who initiate it, the number does not account for those who are unable to access it.

“The system is complicated and creates significant logistical and emotional burdens for young people,” she said. “This number only reflects the young people who actually manage to get to court. There have been many who simply could not find a way to miss school to attend court during business hours without their parents being alerted.”

Since the COVID-19 pandemic, court hearings have taken place online, making it even more difficult in some circumstances, she said. The court process also makes victims relive their pain, she said.

Ultimately, the bill passed with only Democratic support. Democrats Chris Belt, of Swansea, Thomas Cullerton, of Villa Park, Bill Cunningham, of Chicago, Napoleon Harris, of Harvey, Michael Hastings, of Frankfort, and Steve Landek, of Bridgeview, were all recorded as “not voting” on the measure.

Because it did not receive a three-fifths majority, it cannot take effect until June 1, 2022, due to a provision in the state constitution that applies to bills passed after May 31.

Faith leaders, including Bishop Thomas Paprocki of the Catholic Diocese in Springfield, earlier in the day argued the parental notice law serves as a deterrent to abortion. At a Capitol news conference, he characterized abortion as murder and said the parental notice act was about parental rights and protecting the mental health of the child.

“These laws exist because they protect children from making serious life-changing decisions that they are not yet equipped to make,” he said. “These laws exist to protect the rights of parents to fulfill the duty that God has entrusted to them, and that no government can take away.”

But advocates argued pregnant youths notify their parents willingly in the vast majority of situations.

“And that’s not going to change,” Werth said. “If we repeal the parental notice of abortion act in Illinois, a majority of young people will still choose to involve their parents, one or both parents, in this decision because that is their chosen and trusted support system.”

The unpaid working group would include four members appointed by each the speaker of the House, Senate president and governor, at least half of which are youth. Minority leaders would each appoint two members, half of them youth. Each legislative leader would also appoint a member from their chamber.

The working group would report to the General Assembly and governor by July 1, 2023.