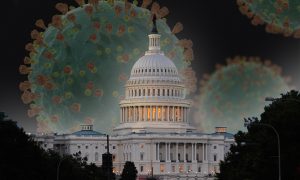 SPRINGFIELD – Amid widespread closures and event cancellations in response to the novel coronavirus disease pandemic, businesses and governments of all sizes and levels are feeling the financial stress and considering steps forward.

The federal government on Tuesday began debate of an $850 billion stimulus package which could include checks written to all Americans at the urging of President Donald Trump. Another federal bill to provide paid sick leave to workers among other provisions awaits action in the U.S. Senate.

Nearly two weeks ago, Congress approved and Trump signed an $8.3 billion supplemental coronavirus response funding bill, which will provide $14.6 million to the state’s public health department and $8.7 million to Chicago’s. The money can be used for patient monitoring, lab testing, acquisition of test kits and protective equipment, and research into vaccines and therapeutics.

In Illinois, Gov. J.B. Pritzker has urged stronger action from the federal government while also taking COVID-19 response steps at the state level. He noted Tuesday the administration will file for statewide eligibility in a federal loan program for small businesses facing financial hardship.

“My Department of Commerce and Economic Opportunity has secured the necessary documentation to declare a statewide Economic Injury Declaration with the U.S. Small Business Association,” Pritzker said.  “The SBA is offering coronavirus disaster assistance loans to help impacted companies get through this period of instability, and this will ensure that all of our counties qualify for assistance.”

Eligible small business or nonprofits could receive up to $2 million that can be used to pay debts, payroll and other bills they can’t otherwise afford due to the pandemic. The interest rate is 3.75 percent for businesses and 2.75 percent for nonprofits, and terms can be as long as 30 years, according to the governor’s office.

But during his briefing a day earlier, Pritzker noted that providing state tax relief to bars and restaurants – which are closed for dining-in but otherwise open for delivery or carry-out for at least the next two weeks – is a “balancing act” in terms of state government and local business needs.

“We want to be good to our small business people, there’s no doubt about it, and I care deeply about making sure that entrepreneurs are successful,” he said at a Monday news conference. “And the balance that we’re trying to make is that … delays (in tax payments) for example, could be an enormous hit to the state of Illinois. And so we’re trying to work with the federal government to get a little bit of help in providing that relief.”

The Illinois Chamber of Commerce is backing the governor in calls for greater federal action.

“The state can only do so much. The federal government needs to do more,” Illinois Chamber President Todd Maisch said in a phone call Tuesday.

He said he would like to see a reduction in federal payroll taxes to reduce the cost of employing a person “by as much as about 20 percent,” and he urged expedited release of the SBA funding to give businesses some breathing room.

“The SBA is going to provide loans, but if the process, if it takes too long or it’s too cumbersome, it’s not going to be very effective,” he said.

He also said state regulators could send a clear message to local banks and credit unions that they would not be audited for providing leniency for small businesses which are paying off loans.

For local governments, the Illinois Municipal League said financial stressors are already being felt as municipalities plan their operating budgets for the fiscal year that begins May 1.

“We’re already seeing a decline in sales activity, and with the closure of restaurants and bars there is a correlating decline in revenue from just that one aspect of the retail industry,” Brad Cole, IML executive director, said in a phone call Tuesday. “But this is going to be an ongoing issue and it’s not going to be just one week or two weeks.”

The IML is asking the Federal Emergency Management Agency to activate the Community Disaster Loan Program under section 417 of the Robert T. Stafford Act, which governs federal disaster response.

“This would be for any major disaster. So whether it’s a natural disaster or a public health disaster, this would allow for communities to seek loans when they have seen a substantial loss in their revenues,” Cole said.

In a letter dated Monday, IML President Leon Rockingham Jr. asked Pritzker to get behind the request to FEMA.

“As mayor of the city of North Chicago, I can personally attest to the commitment of the 1,298 cities, villages and towns throughout Illinois to respond to the continued needs of our residents during this emergency,” Rockingham said. “I can also attest to the reality that municipalities throughout the state have limited resources to absorb the inevitable reduction in revenues that the economic upheaval caused by this crisis is certain to create.”

Pritzker emphasized other actions his office was taking at his Tuesday briefing as well, noting it has filed a federal waiver to expand Medicaid coverage during the pandemic and is awaiting a response. He also said his administration is working with the federal government to ease eligibility requirements for food assistance in programs.

He noted the Illinois Commerce Commission has urged investor-owned, regulated utility companies to halt service disconnections and suspend late fees, and he said Tuesday that “most utilities” have agreed to do so.

Maisch, however, said the state and federal governments need to get on the same page when it comes to paid sick leave.

“It seems to me that the paid leave issue should be one federal standard across the board, and then the states can get out, should be removed from that process,” Maisch said.

Maisch said the U.S. Chamber of Commerce is working to oppose any federal action on paid leave that would require small businesses to pay employees up front only to be reimbursed through tax credits.