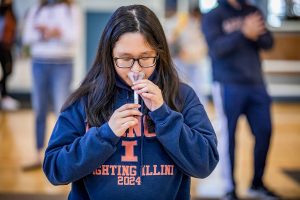 To help increase capacity and facilitate faster access to COVID-19 testing in schools across the state, the Illinois Department of Public Health (IDPH) has partnered with the U.S. Health and Human Services’ Midwest COVID-19 Testing Coordination Center (MCC) to provide testing to all public and private schools that are now seeking to establish a testing program.

The Biden Administration’s MCC covers 16 states and is managed by Battelle, a Columbus, Ohio-based non-profit research and development company.

However, more than 70 percent of SHIELD districts signed up after Aug. 1, resulting in a surge in demand that has lengthened the time it takes schools to complete their onboarding steps. This new partnership with MCC will expedite the onboarding process ensuring schools have access to testing as quickly as possible.

“I am delighted to see this level of interest for establishing testing as a layer of protection in our schools as we fight COVID-19 on all fronts,” said Dr. Ngozi Ezike, director of IDPH.  “Even as we work continuously to administer vaccines to more people, we are supporting schools in their work to administer and improve their testing programs. The ability to test and rapidly identify infected individuals prevents spread, keeps students safe, and maximizes in-person learning.”

In recent weeks, SHIELD Illinois has taken other steps to speed up the onboarding process: launching a dashboard to bring greater transparency so schools can better monitor their status, adding regional drop-off locations to reduce transportation time to labs, and hiring additional staff to assist schools with onboarding and testing.

“SHIELD Illinois contracted with the state and built a system for 300,000 in-school tests per week, but current demand far exceeds that,” said Ron Watkins, managing director of SHIELD Illinois.  “We are excited to partner with the federally funded MCC to add capacity and speed access to testing for students across Illinois.”

MCC is funded by the U.S. Health and Human Services’ Operation ET to expedite access to free COVID-19 testing for public and private K-12 schools and other congregate settings, such as PreK programs, long-term care, and homeless shelters.  MCC manages the logistics of administering COVID-19 tests to help schools meet their needs.

Schools will follow MCC’s self-collection protocol and ship the samples to a member of MCC’s lab network.  Shipping is covered by MCC and SHIELD Illinois will reimburse districts $8 per test to cover the cost for schools to collect samples and implement a testing program.

“The Midwest Coordination Center focuses on coordinating with state and local authorities through unique partnerships, including SHIELD Illinois and the state of Illinois,” said Beverly Roberts, general manager of the MCC program.  “Our goal is to supplement and expand testing resources, serve educators and students to make in-person school safer and to mitigate the pandemic spread among youth and underserved populations.”

SHIELD Illinois has performed more than 1 million tests at schools, universities, colleges, community colleges, and businesses statewide.  This widespread testing has made it possible to identify infected individuals so they can be isolated to prevent spread of the disease.