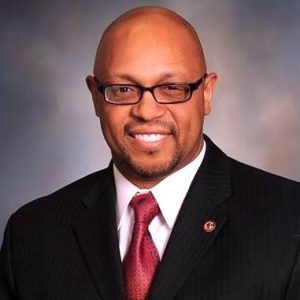 SPRINGFIELD — State Rep. Thaddeus Jones, who was elected Calumet City mayor in April, is facing a challenge to his mayorship that is based on a municipal referendum that prohibits a Calumet City mayor from also serving as a state representative.

But Jones, a Calumet City Democrat, said a recently enacted state law ends any further challenges to his mayorship based on the referendum because a new law prevents local governments from requiring a member of the General Assembly to resign his or her office to seek elected office in that local government.

The referendum, which voters in Calumet City passed Nov. 3, bans a person from seeking mayoral office “if, at the time for filing nomination papers, that person also holds an elected, paid office created by the Constitution of the State of Illinois.”

The referendum applies to “all persons seeking nomination or election to, or who hold, the office of Mayor of the City of Calumet City at the February 23, 2021 Consolidated Primary Election and each election thereafter.”

Jones defeated incumbent Mayor Michelle Markiewicz-Qualkinbush, who was seeking a fifth term, in the February primary.

He went on to win an April 6 election against write-in candidate Tony Quiroz and was sworn in, becoming the first Black mayor of Calumet City.

After the referendum was certified late last year, two residents in Calumet City filed objections with the city’s Municipal Officers Electoral Board, seeking to have Jones’ name removed from the February ballot.

The residents argued the referendum was effective on Nov. 3, therefore Jones was not legally qualified for the office sought at the time nomination papers were filed.

On Dec. 21, a majority of the Board agreed with the objectors’ arguments and found Jones’ name should be taken off the primary ballot.

His case eventually reached the Illinois Supreme Court, which ruled in Jones’ favor.

In March, a unanimous Supreme Court ruled that Jones’ name was legally placed on a February primary ballot seeking the Democratic nomination for Calumet City mayor because the referendum did not take effect until the election results were certified on Nov. 24.

The Illinois Supreme Court, however, did not rule on the validity of the referendum.

But Senate Bill 825, which Gov. J.B. Pritzker signed June 17, explicitly voids the mandate that was approved in the referendum.

The new law states “a unit of local government may not adopt an ordinance, referendum, or resolution that requires a member of the General Assembly to resign his or her office in order to be eligible to seek elected office in the unit of local government. Any ordinance, referendum, or resolution that contains such a provision is void.”

In a statement, Jones said the new elections law “officially puts an end to a long history of divisive politics within the government of Calumet City.”

Spokespeople for the attorney general’s office and Cook County state’s attorney’s Office did not respond to requests for comment.