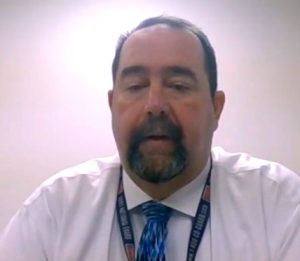 Tony Kolbeck, Illinois Department of Veterans Affairs Chief of Staff, testified Tuesday, March 16 before the House Veterans’ Affairs Committee to update the committee on the continued impact of COVID-19 on the four state-run veterans homes. (Blueroomstream.com)

SPRINGFIELD — At a committee hearing Tuesday, March 16 Illinois Department of Veterans’ Affairs officials reported that all four state-run veterans homes have no staff or residents currently positive for COVID-19, but the agency is still working to produce uniform infection control procedures for the facilities.

IDVA Chief of Staff Tony Kolbeck, who testified during the virtual House Veterans’ Affairs Committee hearing, said he expects those protocols will be finalized within two weeks.

The most severe outbreak was reported at the LaSalle home where 36 residents have died of COVID-19 since November, or roughly one-quarter of the resident population.

The LaSalle home administrator, Angela Mehlbrech, was fired in the aftermath of the outbreak, and the director of nursing at the LaSalle facility, Jackie Cook, remains on leave. Former IDVA Director Linda Chapa LaVia resigned in January, following calls for her to step down due to the department’s handling of the outbreak.

In his testimony, Kolbeck said the vacancies left by Mehlbrech and Cook have not yet been filled.

Democratic Rep. Lance Yednock of Ottawa asked the representatives from IDVA about the department’s efforts to implement new protocols or procedures at the veterans homes “in order to do something different than what has happened at LaSalle in case we have a variant outbreak.”

Kolbeck said he has been in his discussions with the infection control team at Illinois Department of Public Health about establishing those protocols across all the veterans homes.

“While each home has procedures in place that address these matters, the recommendation was to standardize those across all homes. We are still in drafts but working to do that,” Kolbeck said, adding that he anticipates the draft will be complete within two weeks.

With the positivity rate decreasing statewide, Kolbeck said the homes have shifted from testing staff and residents for COVID-19 daily to weekly PCR tests for staff and biweekly tests for residents.

He said the practice of testing staff with an antigen test at each shift change has been suspended but would be reinstated if there is another outbreak. In addition, any staff or resident who becomes symptomatic will be tested using both an antigen and PCR test.

An interagency infection prevention project report and an air quality assessment for all the homes will be publicly released by the end of the week, Kolbeck said.

The prevention project report will contain a review of current policies, procedures, and practices relating to COVID-19 response at each facility and identify issues for which corrective action is needed, according to an IDVA spokesperson.

Indoor visits, under safety restrictions, are allowed at all veterans homes, he said.

“Our facilities are prepared to adjust the visitation protocols to meet the expanded visitation guidelines,” he said.

“The new CDC guidelines will further adjust how admissions are conducted, but typically four to five residents at a time, within a week, is best for both residents and the staff,” Kolbeck said.